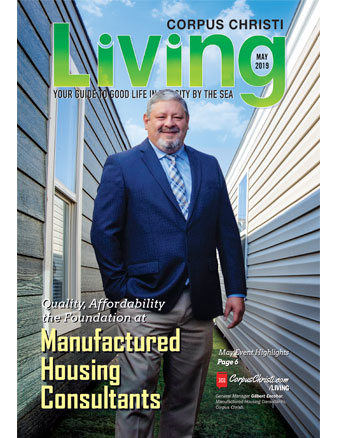 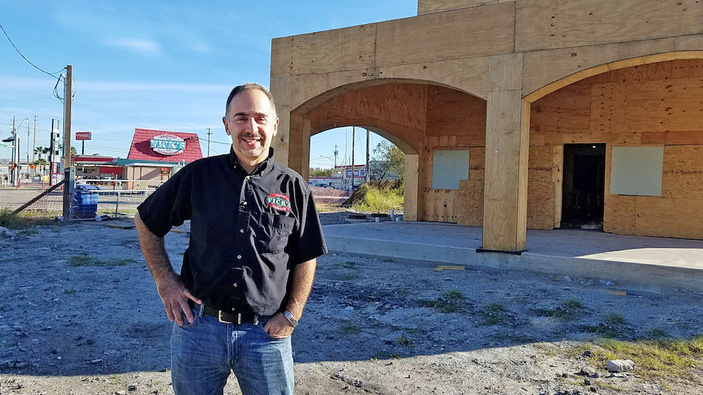 George Pollakis on the construction site of what will soon be Vick’s Famous Hamburgers. The new building is next door to the original location (seen in the background) and will be four times bigger. Photo by Jane Kathleen Gregorio

The original Vick’s Famous Hamburgers will soon move to a new, bigger home right next door to its first location at the corner of Leopard and Port streets in Corpus Christi. Locally-owned and -operated by the Pollakis family for 42 years, Vick's has been lauded in numerous publications, mostly notably for its Ultimate Burger.

Vick’s full menu includes fried chicken, fish and shrimp, along with Tex-Mex. Everything is prepared fresh to order, said owner George Pollakis, who took over the restaurant from his father in 1996.

“We bread our own product, make our own sauces,” Pollakis said. “We take pride in offering delicious, quality food — fast food but with old-fashioned techniques. Nothing is ever pre-made.”

“We must be doing something right for our family business to have lasted this long,” Pollakis said.

One thing Vick’s does right is provide value, which Pollakis defines as the relationship between price and what customers gets in return.

“Trends come and go,” he continued, “but customers always look for value. Two things we never compromise are quality and value.”

For Pollakis, the keys for success also include quality food with a homemade taste, along with great customer service. The menu has been defined and refined by customers over the years based on their preferences — another key to longevity.

“In 1976, our restaurant was originally named Vick’s Fried Chicken,” Pollakis said. “When I took over 20 years later, longtime customers kept telling me how great our hamburgers were, so in 1996, I changed the name to Vick's Famous Hamburgers.”

Pollakis also takes into consideration customer demands during certain times of the year. The upcoming spring and Lenten seasons mean more emphasis on hand-breaded fish and shrimp dishes. He also plans to add a Greek salad to the menu.

In 2000, Vick’s Famous Hamburgers added a second location at 4989 Ayers St. Now, it is building a whole new restaurant that will be four times the size of the original, which is just next door to the construction site.

With his son, Anthony, set up to take over as the third-generation owner and operator, Vick’s Famous Hamburgers will continue to grow and serve its customers, who are also coming back generation after generation.

“It’s so gratifying when customers tell me, ‘I was a little kid when my parents used to bring me here, and now I have my own family and I'm bringing my kids here,’” he said. “It’s the small, family businesses that are the thread of a strong community.”

Chubby’s Mattress & Furniture Is There to Help with Furniture Needs

Vela Orthodontics: For a Perfect Smile

Pure Energy Fitness: Where to Work on Getting Fit
More Business Spotlight
Advertisement