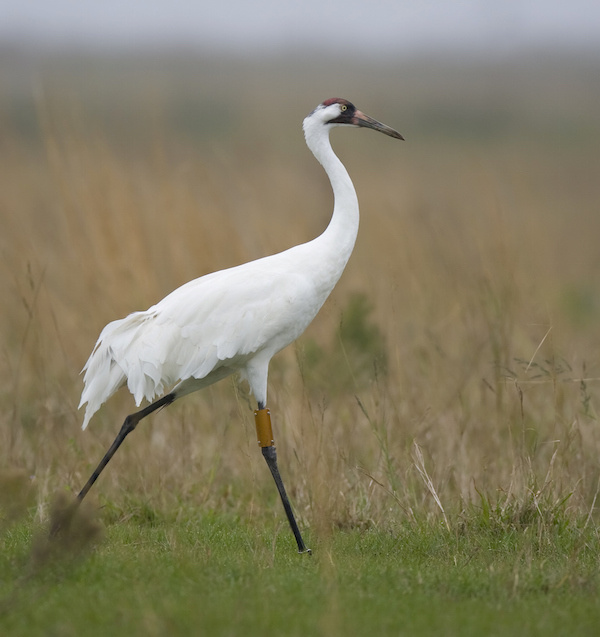 One of the few whooping cranes captured, tagged and released in an attempt by researchers to learn more about the daily life of North America’s most endangered bird. The only flock of whooping cranes in the wild spends its winters in the Aransas National Wildlife Refuge near Corpus Christi. Courtesy photo

Bird migration is in full swing in the Coastal Bend, according to Capt. Tommy Moore, operator of the “Skimmer” birding tour boat at Fulton Harbor. That includes the endangered and sought-after whooping crane.

“One pair of whooping cranes stayed over the summer this year,” Moore said. “We are expecting good numbers of whoopers to start arriving in early November. Conditions have been favorable, with plenty of fresh water and blue crabs for them to eat.”

Every year from November to March, the Rockport and Fulton communities embrace the arrival of more than 500 whooping cranes, the last remaining wild flock of the endangered birds left in the world. The area is a great place to view North America’s tallest bird in its habitat. Whopping cranes stand at over 5 feet tall and have a 7-foot wingspan. They spend their winters in and around the Aransas National Wildlife Refuge, including two that have been returning to Port Aransas for the past few years.

The wild flock numbered only 15 in the 1940s. It was officially classified as endangered in 1967. Since then, the population has slowly made a comeback, and numbers are now approaching 600.

Whooping crane pairs, which mate for life, and families of whoopers journey 2,500 miles each year starting from the southern Canada marshes, crossing the northern United States, and landing at the Texas Gulf Coast.

Birding opportunities exist by land and by sea.

Only 30 minutes from the Rockport-Fulton area, the Aransas National Wildlife Refuge was recently named the best place for birding in the United States. As the winter home of the whooping cranes, it is a popular place for birders throughout the season.

Entrance fees to the refuge have been temporarily suspended until further notice. Lands and outdoor spaces remain open to the public. Visitor centers are closed, however, because of the pandemic.

Whooping cranes also can be spotted as far south as Goose Island State Park. The marsh offers an abundance of food sources for birds, making it an excellent habitat. Blue crabs in this area are a top food source, along with wolfberries.

Local professional fishing guides offer birding tours by appointment through the end of March. Health and safety precautions for the 2020-21 season have been put in place due to COVID-19. Boat trips are limited in capacity and adhere to social distancing rules. Hand sanitizer is available and face coverings are mandatory.

The tours include professional narration and binoculars for an up-close view. Typically, tours last three hours with about 30-60 species of birds and other animals spotted along the way.

“One of the primary goals of the Texas program is protecting the coastal habitat for wintering whooping cranes, which is critical for the species,” she said. “There are quite a few other animals who make use of this habitat, too, including lots of herons, sandhill cranes, wild hogs, and alligators.”

The white pelicans have arrived, Moore said, and other birds are making their way south every day.

“While we have only had a couple of cold fronts so far, all of these hurricanes have given us many days of north winds assisting the migration,” he added.

For more information on birding or a list of boat birding tour operators and other area attractions in the Rockport-Fulton area, visit rockport-fulton.org or call Rockport-Fulton Chamber of Commerce at 361-729-6445.

Plan Spring Break on the beach around these dates