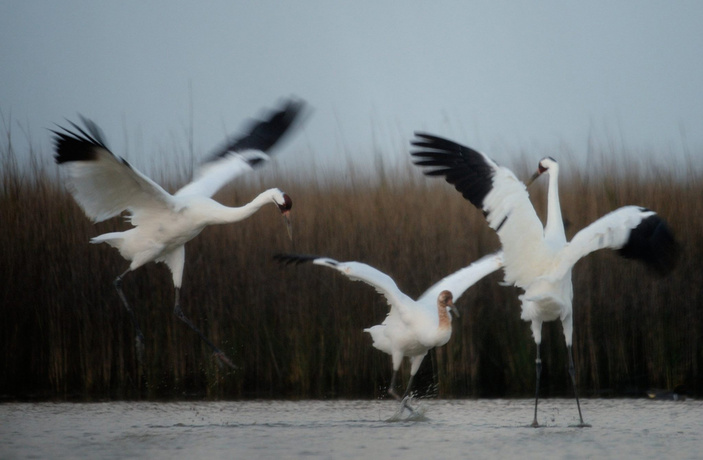 Whooping cranes migrating to the Aransas National Wildlife Refuge for the winter begin arriving in December.

The Texas Parks and Wildlife Department is encouraging Texans, especially those on the Coastal Bend, to watch for migrating whooping cranes.

The graceful endangered cranes will begin arriving to the coastal marshes of Texas at the beginning of December. Every year, they make a 2,500-mile journey from Canadian breeding grounds in Northern Alberta, Canada, to the Aransas National Wildlife Refuge near Port Aransas. An annual Whooping Crane Festival, which includes workshops and birding boat trips, is held in Port Aransas each winter. The 2022 festival is set for Feb. 24-27.

In 1967, a U.S. Geological Survey Group, the Patuxent Wildlife Research Center in Maryland, collected 12 eggs from the wild and began the largest whooping crane captive breeding program. Thirty chicks are raised each year.

As the rarest bird in North America, whooping cranes are federally protected, making it against the law to disturb or harass them. Hunters are urged to be extra vigilant. The U.S. Fish and Wildlife Service this year is asking Coastal Bend landowners to consider providing fresh water on their land to aid the birds. A forecast La Nina weather pattern could make for a drier-than-usual winter.

How to identity a whooping crane