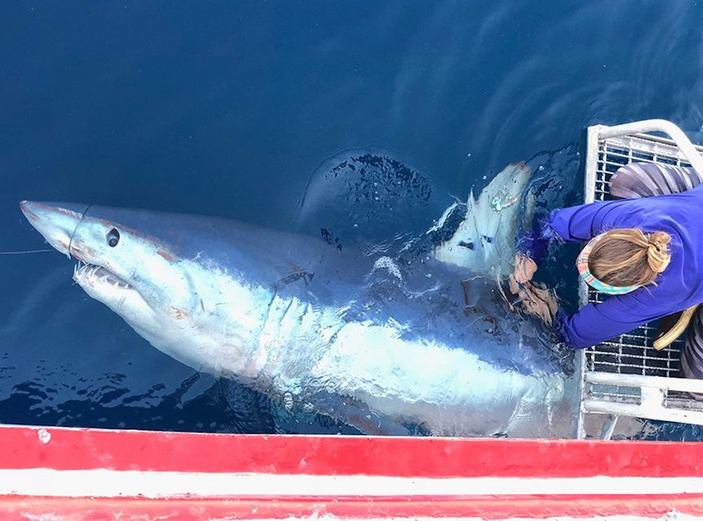 A researcher from Harte Research Institute for Gulf of Mexico Studies at Texas A&M University-Corpus Christi tags a mako shark in the Gulf of Mexico. HRI shark researchers will be on hand at Brewster Street Ice House in Corpus Christi for a Shark Week Live event from 6-8PM on Tuesday, July 30. Courtesy photo

Celebrate Shark Week at Brewster Street Ice House, 1724 Tancahua St. in Corpus Christi, with some of the human stars of the show from Harte Research Institute for Gulf of Mexico Studies at Texas A&M University-Corpus Christi. The event is set for 6-8PM on Tuesday, July 30.

Admission is free and includes meet-and-greets with shark researchers, shark-tagging demonstrations, and kid-friendly activities. Interactive event stations throughout the venue allow visitors to identify, tag, and track real sharks in the Gulf of Mexico. HRI’s shark science gear will be on display.

HRI officials will participate in a question-and-answer session while visitors enjoy Shark Week programming from the Discovery Channel and shark-themed food and drink specials. Shark-themed giveaways for adults and kids happen throughout the evening.

“Sharks are great ambassadors for the ocean,” said Dr. Greg Stunz, HRI Endowed Chair for Fisheries and Ocean Health and Sportfish Center director. “Most people are naturally curious about sharks, and with the help of these charismatic animals, we have a great opportunity to teach children and adults about why healthy oceans are key to the well-being of us and the planet. Sharks are the key that opens the door for scientific curiosity and learning.”

Stunz and other researchers from HRI have filed five specials for Shark Week. Featured are its work tagging and tracking sharks off the beaches and on artificial reefs in the Gulf of Mexico. Stunz, who has been a featured shark expert on numerous Discovery Channel and National Geographic programs, will be on hand to talk about his work.

Coastal Bend anglers are credited with playing a huge role in the way HRI researchers study sharks, having helped tag more than 6,000 sharks. The largest shark-tagging program in the western Gulf of Mexico is operated by the Center for Sportfish Science and Conservation.

“The Sportfish Center has greatly expanded our tagging program, and we are proud to include a large citizen-science element,” Stunz said. “Through this program, everyday anglers can participate in collecting valuable scientific data by tagging sharks or, if lucky enough, report the capture of a tagged fish and claim a reward.”

Online mapping tools at OCEARCH.org allows anyone to follow the movement of sharks. You can even download the Shark Tracker app for iOS or Android phones.

“This amount of effort and costs could have never been possible by scientists working alone,” Stunz said. “Plus, this adds a new dimension to the angling experience as everyday folks can contribute to the conservation of these amazing animals.”