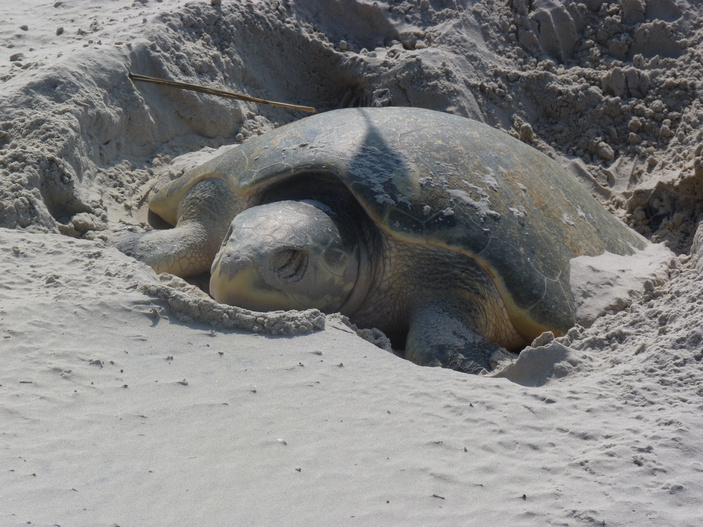 A mother sea turtle laying eggs on a North Padre Island beach near Corpus Christi. Sea turtle nesting season peaks in May. Hatchling releases begin at Padre Island National Seashore in June but might be restricted this year due to the coronavirus pandemic. Courtesy photo

Sea turtle nesting season, which will peak in May, has begun in the Coastal Bend, and turtle patrols are walking the beaches in search of nesting moms while maintaining social distancing guidelines.

“We don’t have as many volunteers integrated this year because of COVID-19 guidelines,” said Donna Shaver, PhD, and chief of the Division of Sea Turtle Science and Recovery, National Park Service, Padre Island National Seashore. She is also the Texas coordinator for the Sea Turtle Stranding and Salvage Network.

Volunteer training sessions, all of which have been completed this year, had to be split into three groups of 10 rather than groups of 30. Because the UTVs used to patrol the beaches don’t allow for distancing by 6 feet, biological technicians cannot be paired with volunteers and must go alone on patrols.

While beaches in Florida and Thailand, which are closed to visitors because of COVID-19 restrictions, have reported an increase in sea turtle nestings, Shaver said Coastal Bend beaches are open and experiencing high volumes of human traffic.

“I’ve gotten other press calls asking me that same question: Has COVID-19 affected sea turtle nesting season,” Shaver told 101CorpusChristi.com. “COVID-19 has not been a factor for us since our beaches are open.”

The number of nesting sea turtles has fluctuated over the past 10 years, Shaver said. She is hoping for an increase this year over the last two, as it is the third year in a three-year laying cycle. Mother turtles tend to return to the same place every three years, and 2017 was a good year for nesting.

Mother turtles also have no maternal instincts beyond laying the eggs. They quickly cover them up and head back to sea, leaving their progeny vulnerable to predators and the environment. When spotted, eggs are taken to Padre Island National Seashore for hatching.

Hatchling releases draw hundreds of observers to Padre Island National Seashore in the early hours of the morning to watch as the tiny turtles march boldly into the surf.

The first releases should happen sometime between June 8-13, Shaver said. She added that how to handle releases during a pandemic is currently under discussion.

“We can integrate social distancing and masks, but we’re interested in how to control the crowd numbers if there are restrictions of say, 50, at that time,” she said. “I don’t want to throw in the towel on public releases this year. We may not have the same capacity as previous years, but we hope to either rope off areas and maybe have a ticket system set up so we don’t have to turn people away at the gate. We will try to find a way to make it all happen.”

Anyone who comes across a nesting sea turtle on the beach should notify Shaver at the Division of Sea Turtle Science and Recovery at 361-949-8173 Ext 226.

“Someone will be there right away,” she said.

Keep crowds back from the nesting place and try not to spook the mom, she said. Also, drive slowly on the beaches and stay on the designated roadways to help spot and protect nests.

A Taste of Buc Days — Virtually