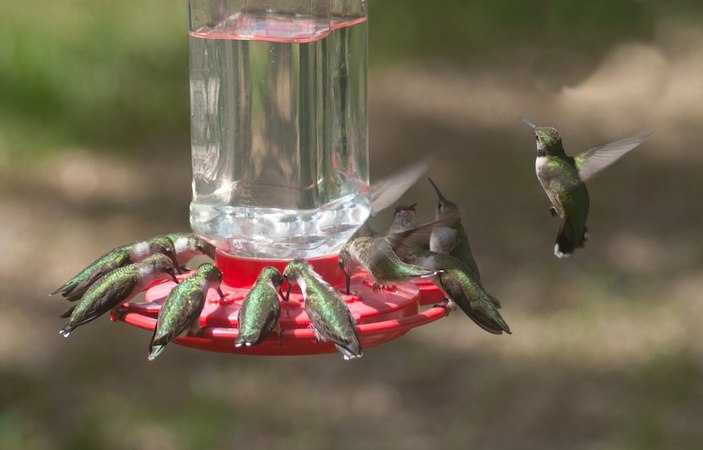 Hummingbirds bully their way to eat at a local feeder. The birds are competitive with each other but rarely cause harm. Hanging feeders in a cluster can ease some of the competition and create a great backyard show. Courtesy photo

Prepare now to visit to Rockport-Fulton in September for the 31st annual HummerBird Festival, coming back strong two years after the devastation of Hurricane Harvey. Locals are already setting out feeders and enjoying the migrating birds as they begin to make their way into the area.

The four-day festival begins Thursday, September 19, with a welcoming reception and dinner and ends Sunday, September 22, after a variety of workshops, speakers, field trips, backyard tours, and more. Over 75 nature-centered vendors will set up their wares, while 12 speakers will hold workshops and lead field trips.

The Rockport-Fulton area has honored its fall visitors each year since 1988 when famous Texas birdwatcher and resident Connie Hagar discovered the tiny creatures’ proclivity for Coastal Bend stopovers.

Thousands of the birds take a rest in the Rockport-Fulton area to store up energy before embarking on a non-stop flight across the Gulf of Mexico to their winter homes. To make that 800-mile trip, the birds must increase their body fat by 50 percent. They do that mostly in the Rockport-Fulton area, a venture that peaks toward the end of September.

A new feature this year, “Art for Wildlife Conservation” presents two hands-on workshops creating 3D models of birds. Sign up for either session, from 1-3 p.m. Saturday or Sunday. The workshops are led by Niharika Rajput, a conservation artist from New Delhi, India.

Other highlights include opening night guest speaker Martha McLeod, who was recently named Birder of the Year by Swarovski Optiks/Bird Watcher’s Digest.

World-renowned birder Greg Miller speaks at 5 p.m. Saturday. He became household name after actor Jack Black portrayed him in the movie “The Big Year,” about the year he traveled 130,000 miles to spot as many different birds as possible. He managed to count over 700 species, more than most birders do in a lifetime.

• Jason Loghry, who went on an expedition in the Arctic to explore shorebirds;

The full roster with locations and times can be found on the HummerBird Festival website. Also, check out the festival’s Facebook page to follow updates. Get ready to post your own festival adventures using the hashtags #RFHummerBird and #HummerBird2019.