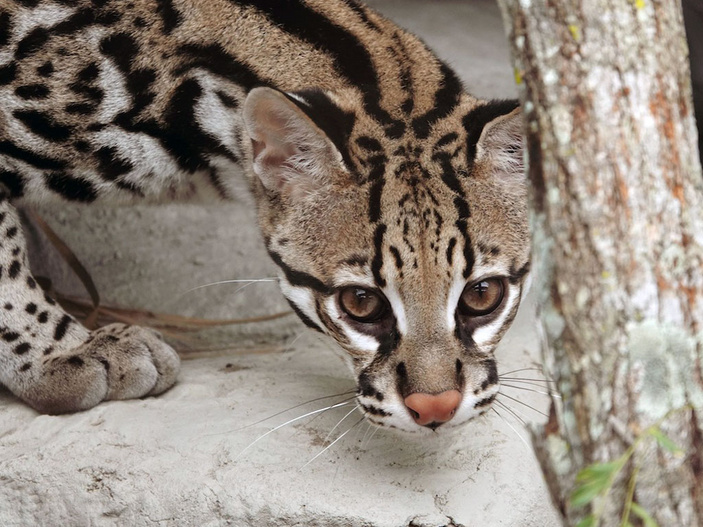 One of the two new ocelots at the Texas State Aquarium in Corpus Christi. The pair are sisters named Milla and Leeloo. Courtesy photo

Two sister ocelots recently moved into the Texas State Aquarium in Corpus Christi. Milla and Leeloo arrived from the ABQ BioPark in Albuquerque, New Mexico, as part of the ocelot Species Survival Plan. They have been in quarantine since March but will make their public appearance sometime this summer.

“One of the core roles of the aquarium’s new ocelot exhibit will be to educate our visitors about the Texas scrub brush ecosystem and important efforts underway to help preserve ocelots and their habitat,” said Jesse Gilbert, the aquarium's senior vice president and chief operating officer. “The main threat to ocelots is habitat destruction and fragmentation. Ocelots need large areas of dense brush to survive. As rural lands are developed, ocelot habitat disappears.”

The U.S. Fish and Wildlife Service lists the ocelot as endangered. It is among the most elusive and solitary animals in North America, which makes the species difficult to track and study.

Conservationists estimate that only 50 to 80 ocelots remain in the wild in the United States. They have been pushed into two tiny population pockets in deep South Texas brush country, where they continue to decline.

Texas A&M University-Kingsville’s range management team has partnered with the aquarium’s exhibits department to design and equip the ocelots' new home in Corpus Christi. Milla and Leeloo will live in a carefully designed brush country habitat built around a horticulture plan that will ensure a comfortable life.

“The aquarium would like to extend a special thanks to Dr. Clay Hilton and the Caesar Kleberg (Wildlife) Research Institute at Texas A&M University-Kingsville for their dedication to preserving this unique species and helping make this important conservation effort a reality,” reads a statement on the aquarium’s website.