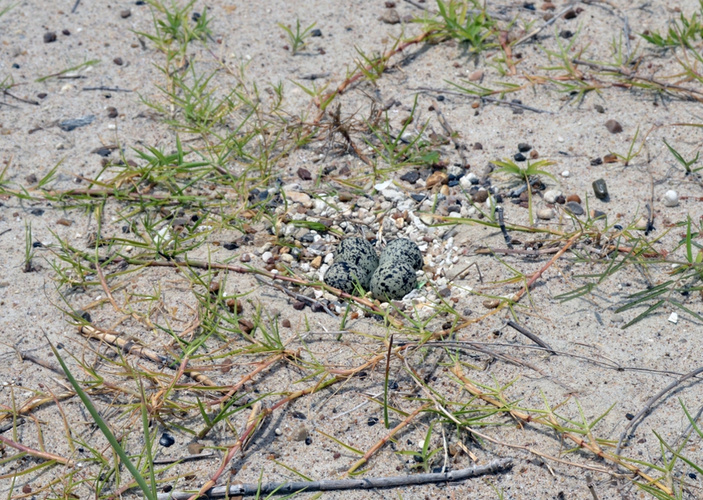 Nesting shorebirds lay their eggs directly onto the sand in slight indents, depending on camouflage to protect them from predators. Human feet can be a worse menace, which is why Texas A&M University-Corpus Christi has fenced off a nesting area on University Beach at 6300 Ocean Drive. Courtesy photo

This year has been one of the best nesting seasons for Coastal Bend shorebirds along University Beach across from Texas A&M University-Corpus Christi. Shorebird nesting season begins in April and lasts through August.

The beach at 6300 Ocean Drive has been fenced off to protect 13 nests recorded there this season. Graduate students visit the beach at least three times a week to track the progress of the birds, which include least terns, Wilson’s plovers, willets, and killdeer.

“It’s important to (put up fences) because a lot of these birds that nest on these coastal habitats are very, very vulnerable,” said David Newstead, director of the Coastal Bend Bays and Estuaries Program.

He noted the birds lay their eggs in shallow depressions on the sand, leaving them open to the elements and predators. The birds depend on camouflage to hide their vulnerable eggs, which works against them when humans walk the beach without looking out for them.

“Human and animal activity can frighten the birds and cause them to abandon their nest, leaving the eggs or baby birds exposed to predators and the heat,” she said.

Most of the birds nesting on University Beach are under some sort of heightened conservation concerns, Newstead said.

“They are not necessarily endangered, but they are all not doing extremely well population wise,” he said. “So, whatever we can do here can help them keep from becoming endangered.”

The university offered several tips on how to avoid disturbing nesting shorebirds:

• Keep dogs on a leash and away from the area.

• Properly dispose of trash to keep scavengers away.

• Do not abandon fishing line or other gear.

• Remove any abandoned fishing line or gear you find.

• Don’t fly kites or kite surf near the area.

• Leave the area if shorebirds fly at you — they let you know if you are too close.