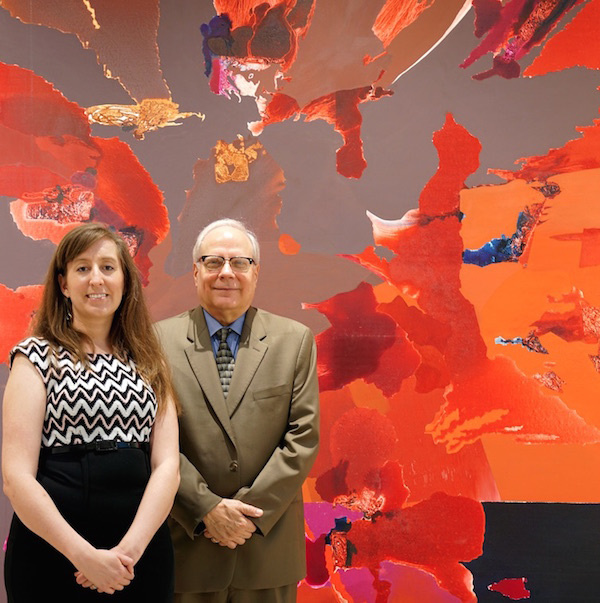 Director of the Art Museum of South Texas Joe Schneck and communications director Karol Stewart assess the installation progress of an exciting new interactive exhibit, “Dorothy Hood: The Color of Being/ El Color del Ser,” which is now open. The show goes on the road after Jan. 8, 2017. Photo by Jon Brandt Photography

Create your own Dorothy Hood painting and email it to yourself at an interactive new art exhibit at the Art Museum of South Texas. With a goal of putting the exhibit on the road and the Corpus Christi museum on the national map, the exhibit of Hood’s work, which opened Sept. 30, will be on display until Jan. 8.

Hood, who grew up in Bryan, bequeathed her work to a foundation that, in turn, gave her archives to The Art Museum of South Texas after her death in 2000. Hood spent most of her life as an artist in Mexico, living and working with Diego Rivera and Frida Kahlo among other famous Mexican artists.

Hood moved to Houston after 40 years in Mexico. Her art reflects the light and environment of her surroundings and her love of South Texas, making the Corpus Christi museum a perfect repository for her life’s work.

“She really draws you in with her work,” said Karol Stewart, coordinator of community services at the museum. “What it says is that the light in Texas is so unique. It’s not an interpretation; it’s what’s here. Her work communicates the vibrancy of color, the vividness, the culture here that is unique.”

Museum director Joe Schenk, who initiated the project, called her an overlooked female artist who is now being discovered as one of the major modern artists of our times. She was mostly overlooked, Schenk said, because of where she lived.

“Dorothy Hood is really the Texas woman artist of the 20th century, certainly the last half of it,” Schenk said. “Our intention is to shine a light on her talent and show that she is on par with any painter of the 20th century. She just didn’t get as well recognized as she should have.”

Another goal of the exhibit is to draw attention to the museum that houses her archives.

With that in mind, the museum has gone beyond a display of art on walls. As the first major critical overview of Hood’s paintings and works on paper, “Dorothy Hood: The Color of Being/ El Color del Ser,” also incorporates modern technology designed to educate and enthrall museum visitors.

“This exhibit gives people the opportunity to engage with art at a different level,” Stewart explained. “That’s especially important when dealing with complex concepts like the work of Dorothy Hood, which is abstract.”

One part of the exhibit allows viewers to create a “do-it-yourself Dorothy,” using technology to rearrange pieces of Hood’s work as a different abstract painting and, once satisfied, email it as a completed piece.

“You’ll be able to get a grasp on what goes into creating an abstract piece of art,” Stewart said. “I think most will find out it’s not so easy.”

The museum has also put together a vignette of Hood’s studio, including the chair she sat in and the drawing table and tools she used. Interviews with people who knew her well can be heard on computer tablets, and pieces of her work will be blown up to show the textures and materials she incorporated into her paintings.

“What we really want when someone comes in and sees the run of her career from the 1930s to 2000, and all the moving parts of her life, that they will feel like they know Dorothy Hood,” Schenk said. “We want them to understand her approach to her art and appreciate how she grew and get a complete picture of this artist, not just a snapshot. This exhibit is an entire book of her life.”

The Art Museum of South Texas is located at 1902 N. Shoreline Blvd. Museum hours are 10 a.m.-5 p.m. Tuesday-Saturday and 1-5 p.m. Sunday. The museum is closed Mondays. Admission is $8 for adults, $6 for seniors over 60 and active military, and $4 for students 13 and older. Admission is free for children under 12 and students at Texas A&M University-Corpus Christi.