Cowboys for a Cause bucks typical arena for ship 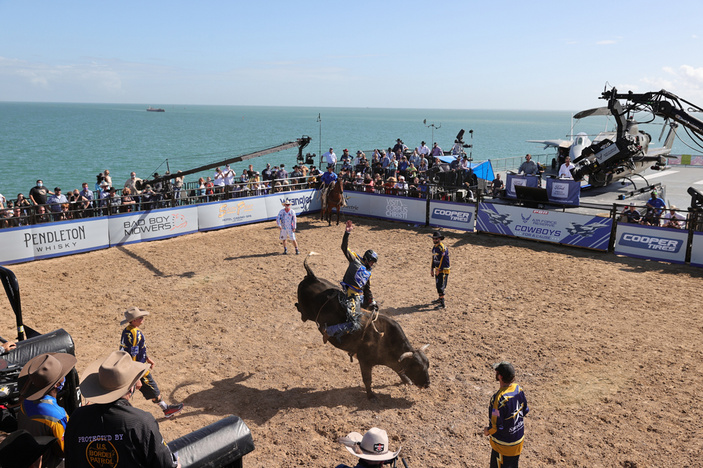 The USS Lexington in Corpus Christi hopes to host No. 4-ranked bull rider Dener Barbosa, pictured in 2020 on the ship, at the 2021 Professional Bull Riders Air Force Reserve Cowboys for a Cause bull-bucking benefit on Sept. 4. Photo courtesy of Andy Watson/Bullstock Media/Cowboys for a Cause

Cowboys for a Cause bucks typical arena for ship

A traditional Texas event will take place at a most unlikely location in Corpus Christi when the Professional Bull Riders return to the USS Lexington to compete in the PBR Air Force Reserve Cowboys for a Cause bull-bucking benefit. The event begins at noon Sept. 4 and will be broadcast on CBS at 1 p.m. CST on Sept. 5.

Over 75,000 pounds of dirt and steel will be brought onto the “Blue Ghost” aircraft carrier to build an arena on the ship on Corpus Christi’s North Beach. The flight deck fits three football fields, with 16 levels, which is plenty of space for just about any big event. Eight teams of three cowboys each will showcase their skills in bull riding to support military members and their families.

PBR Cowboys for a Cause began in November 2020 on the USS Lexington. The exhibition event will include the opportunity for world points for the riders, unlike last season's benefit.

Commissioned in 1943, the USS Lexington set more records than any other Essex Class carrier in the history of naval aviation. The ship was the Navy’s longest-serving working carrier when decommissioned in 1991.

Moved to Corpus Christi in 1992, the Lexington functions as a museum and is a valuable national treasure, having played a significant role in the nation’s defense for nearly 50 years.

It features guided and self-guided tours, a Pearl Harbor room, a MEGA 3D theater, scale models of the aircraft, a flight simulator, escape rooms, and more.

The goal of the USS Lexington Museum is to improve the quality of life of the community by establishing and maintaining a major educational and entertaining museum focused on naval aviation and the role of the aircraft carrier in national defense.

The Japanese reported the Lexington as sunk at least four times during World War II. Somehow, the ship prevailed, and the propagandist Tokyo Rose nicknamed her “The Blue Ghost.” The name is a tribute to the ship and the crew and air groups that served aboard it.