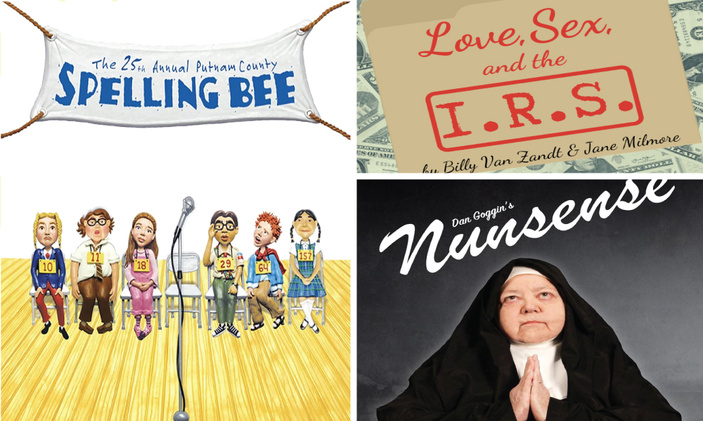 These three shows are currently running at community theaters in the Coastal Bend.

Curtains have opened on the 2020 theater season in the Coastal Bend. The Harbor Playhouse, Aurora Arts Theatre, and Port Aransas Community Theatre all have productions underway and are working on their next amazing offerings.

The run was extended on this hilarious crowd-pleaser about two out-of-work musicians and roommates in New York City who have been filing their income taxes as a married couple to save money. The taxman comes to investigate, as does a potential mother-in-law and the real love interest of one half of the “couple.” Promises the promo information: “insanity ensues.”

A comedic and spell-binding musical, “Spelling Bee” won both the Tony and Drama Desk awards for Best Book. The audience gets involved as six highly competitive spellers vie for the top title in Putnam County. Described as a fast-paced crowd-pleaser, the musical’s small cast and intimate set make for an enjoyable night of theater and laughs.

Sing along with the Little Sisters of Hoboken as they work to raise money to bury the last of their 52 compadres who were wiped out by a bad batch of vichyssoise. No, it’s not a tragedy; it’s a comedy despite the bodies in the freezers. The second longest-running off-Broadway show in history promises hilarity in the style of a variety show, complete with audience participation.

Tickets are $17 general admission; $10 for children; and $15 for seniors, military, and students (IDs required).

This new event is a Good Vibes Fundraiser for the theater.

“A Night of One Acts" by James McClure

“I’ll Be Back Before Midnight!”

“Joseph and the Amazing Technicolor Dreamcoat”

“We Will Rock You”

“The Wizard of Oz”