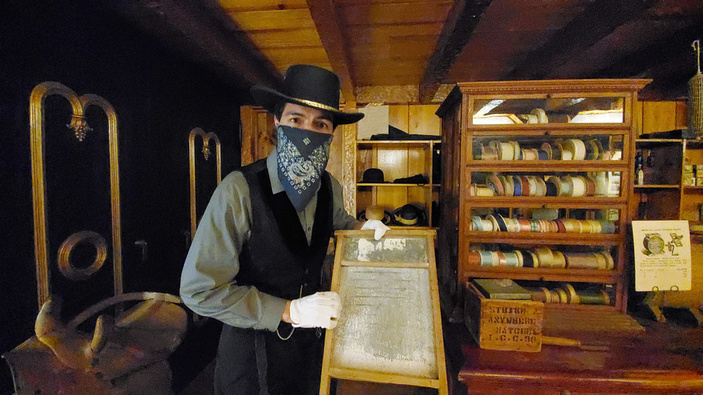 As Mr. Jones, proprietor of Mr. Jones’ General Store, Deron Sun Eagle touts the virtues of this washboard for pioneers needing to wash their clothes. The general store is part of two new Museum LIVE! exhibits at the Corpus Christi Museum of Science and History. Photo by Jane Kathleen Gregorio

Two new exhibits bring history to life at the Corpus Christi Museum of Science and History. The LIVE! program recreates life in the 1800s to the early 1900s in exhibits that capture the spirit of the Old West.

“One of our projects currently in the works is our 'Western Village Town,' which will serve as a a promenade through the late 1800s,” she said. “It will give viewers a glimpse of how this former cowtown evolved into the Corpus Christi we know today.”

The exhibit includes a blacksmith station, a saddlery, leather making, a post office, and a functioning old-time saloon that can be rented for events.

Mr. Jones' General Store is a replica of the Western general stores where settlers could buy anything not grown or made at home.

“In researching our characters, we looked at historical documents from anthropologists and old journal entries,” Sun Eagle said. “From there, we try to re-enact these voices from the past and let the visitors feel as if they are interacting with historical figures.”

With costumes, theatrics, big gestures, and a bit of comedy, actors such as Sun Eagle are able to teach guests about what life was like in the past. Using the utensils of the day, they demonstrate how butter churners, hand operated washing machines, and more worked.

“The visitors get a kick out of it when I interact with them as Mr. Jones trying to convince them to buy these state-of-the-art products from our 1800s catalog,” Sun Eagle said with a laugh. “It’s the equivalent to ordering on Amazon today.” Just a few yards away from the Western General Store is the Union Pacific Railroad/BNSF Railway exhibit and Chaparral Street Station Depot, where visitors can learn about the Coastal Bend railroad system while interacting with Museum LIVE! characters.

“We try to make our environment as authentic as possible, using artifacts such as an old train bulletin that shows the departure and arrival times, an original Western Union telegram, official rubber stamps, a vintage typewriter from the 1910s, and even a phone box with a hand crank,” Sun Eagle said.

“The museum is a magical place and exhibits really do come to life, kind of like the characters in the film ‘Night at the Museum,’” Urban said. “Our biggest goal is to really let guests submerge themselves in this world and get the message across about what Corpus Christi used to be. We want people to appreciate history.”

As both the museum’s event sales manager and a mother, Rebekah Everhart observes how children are responding positively to the Museum LIVE! program.

“It’s difficult because our kids nowadays are always engaged with their phones and devices, but when they come here and experience the Museum LIVE! actors, suddenly, they are drawn in with that actor’s presentation and are really engaged,” Everhart said.

Corpus Christi Museum of Science and History is located at 1900 N. Chaparral St. in Corpus Christi. For more information, call 361-826-4667 or visit the website at ccmuseum.com.