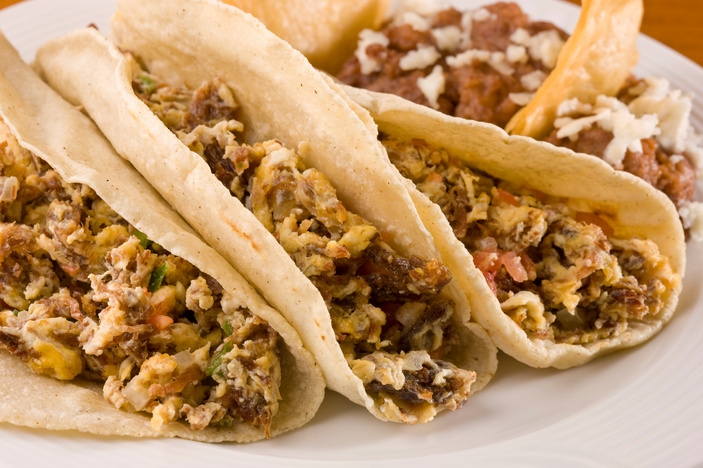 The best breakfast tacos in Corpus Christi usually begin with homemade tortillas. What goes inside depends on where you go to get them. We have some tasty suggestions.

Speaking of history, according to the Smithsonian, the very first taco was actually a piece of paper wrapped around gunpowder used to blow silver out of rock in Mexico in the 18th century. The corn and flower tortilla versions didn’t become well known enough to make it into the dictionary until the end of the19th century.

A tasty hand-held way to eat everything from beans to steak and even scrambled eggs, tacos didn’t break its cultural barriers until the 1970s and 1980s. What began as a Mexican street food for working class people made its way into the restaurants of South Texas, where it caught on fast, moving almost as quickly into a breakfast staple.

The simplest version of a breakfast taco begins with a flour tortilla folded around scrambled eggs and cheese. Next step is to add potato, bacon or sausage, topped with salsa or pico de gallo. From there, coastal cooks go wild, differentiating their fare from others with homemade and/or exotic ingredients.

In Corpus Christi, breakfast tacos can be found from the Whataburger drive-through window to many of the vast variety of Mexican restaurants that dot the city. Here are just a few of our favorites.

1. Santa Rosa, 2722 S. Staples St.If you’re looking for homemade tortillas, Santa Rosa’s has them in both corn and flour. According to its fans, the prices are cheap, the breakfast is awesome (try the bean, bacon and cheese tacos) and the tacos are big! They also serve Mexican Coca-Cola.

2. Southside Barbacoa, 5894 Everhart RoadYou either have to beat the breakfast rush, wait it out or join right in for the best in barbacoa breakfast tacos. Freshly made flour tortillas rate high as does the barbecue and the carne guisada. Highly recommended: Top it off with the salsa verde.

3. Chacho’s Tacos, 3700 Ayers St. Known for its 14-inch breakfast tacos, Chacho’s is a great place to bring a friend and split the order. Tortillas are soft and fluffy and the service is fast and furious, which is necessary in a place this small. But if there’s no seating, you can always pull up to the drive-through window for takeout.

4. Taqueria Almeida #1, 2650 Waldron Road at GlenoakLocated in Flour Bluff just across the street from the high school, this taco stand gets a big thumbs-up from the younger crowd. With outdoor seating always packed and a long line of (mostly) trucks at the drive-through each morning, you can bet some of the best flavors in a tortilla can be found right here. We highly recommend washing down this breakfast with Taqueria Almeida’s refreshing watermelon drink.

5. Taqueria El Potro, 1401 Rodd Field Road Served only until noon, the breakfast tacos at El Potro add the exotic to their eggs: machacado (shredded beef), chicharron (fried pork belly) or Spam (you’re guess is as good as mine!) Also try the toccatas with chorizo, ham or bacon. Rave reviews all around.

My favorite place for breakfast taquitos is Taqueria Garabaldi just a few blocks down Staples from Corpus Christi City Hall. The just renovated their restaurant at 200 N Staples St.