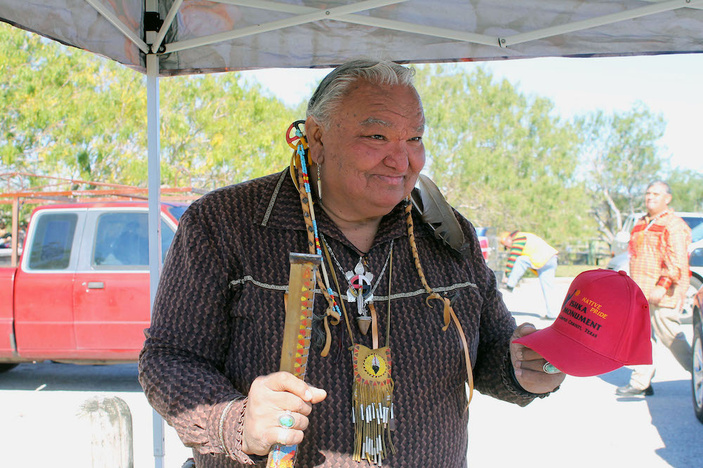 Larry Running Turtle Salazar at Hans and Pat Suter Park in Corpus Christi during a blessing of the grounds Jan. 13. Salazar holds a hat with the logo for the Ishka Monument he hopes to someday see installed at the park. Photo by Chris deLong

Known by archeologists as 41NU2, an area of this seaside city just outside the gates of Texas A&M University-Corpus Christi and Corpus Christi Naval Air Station was once a Native American burial ground. Locals know it as Hans and Pat Suter Park on Ennis-Joslin, a four-lane stretch of asphalt that ends at Ocean Drive. It is the second-largest Indian burial ground in the state of Texas.

The bones and artifacts of hundreds of Native Americans, some thousands of years old, were discovered there in 1933, unearthed by a hurricane. The first official dig was not conducted until the 1990s as the Texas Department of Transportation successfully kept the initial find quiet.

In 1994, archeologists hired to excavate during a road improvement project found the bones of a 13-year-old girl believed to be 500 years old. The word of this find was also kept under wraps until a reporter got wind of it and notified a local Native American activist.

“I went out there to pay my respects and to do my ceremonies for forgiveness for what they were doing,” Larry Running Turtle Salazar said of the find. “(TxDOT workers) ran me out of there. I went back at midnight and was right there by the park singing my songs and praying, and the voices of the winds came in. I apologized for what was going on.”

Salazar and members of the South Texas Alliance of Indigenous People hold a funeral procession in the area every March since that year. They use smudge sticks and herbs to bless the sacred ground.

“For as long as I am on this Earth Walk,” Salazar said, “I will bless the grounds every single year on the date or close to the date I was notified that it was a burial ground.”

An expert on area Native American tribes, Robert Ricklis was an architect at the site in the 1990s. He also wrote a book, “The Karankawa Indians of Texas,” which tells the story of the Karankawa. According to his research, the tribe died out in the 1800s, meaning most of the bodies unearthed at 41NU2 are too old to be Karankawa.

“People have been living in (the Coastal Bend) for 14,000 years,” Ricklis said. “As far as identifying Karankawa, we can only push that back in time about 1,000 years.”

Most of the unearthed bones found at the site are now at the University of Texas at Austin, perhaps all that is left of a prehistoric people who once were the main residents of the Coastal Bend.

The Karankawa and other Native Americans were doomed, according to both Ricklis and Salazar, when the Spanish colonial system collapsed in the 1820s.

“The Spanish wanted to convert them to Christianity,” Ricklis said. “The Anglo-Americans wanted to exterminate them and get them out of the way because they wanted their land.”

Salazar, who is of Tsalagi and Apache descent, tells how the few Native Americans left cut their hair and adopted Hispanic names to pass as Mexican, which is where he gets his last name.

“My people took on Hispanic survival names,” he said. “They learned the language and the culture. They became Mexicano to stay alive.”

Both also agree on something else important about the Karankawas: They were not cannibals as often reported. The Karankawa economy was based on hunting, gathering, and fishing. The tribes were family-oriented and welcoming to outsiders.

A medicine wheel has been installed at Hans and Pat Suter Park along with temporary information markers Salazar hopes will take a more permanent form soon. He and the South Texas Alliance of Indigenous People are raising money for a monument to the Native Americans buried at the site. The March to Ishka monument was designed by the late artist Dave McGary, a world-renowned bronze sculptor. The group needs to raise $300,000 for McGary’s widow to turn his model into the actual statue. The statue of a Native American in full head dress pointing to the east incorporates color and texture in the work.

“We get our blessings from the holy people right as the sun is rising,” Salazar explained. “We say the word ‘Ishka’ as the sun comes up, which means, ‘I will see you again. If not in this lifetime, the next.’”

Direct donations may be made by mailing checks to 1929 Yale St., Corpus Christi, TX 78416. Checks should be made out to “The Ishka Monument.” Donations may also be made online at ishkamonument.webs.com.

Hans and Pat Suter Park is located at 909 Ennis Joslin Road in Corpus Christi. A wildlife refuge popular for bird-watching, it has biking and hiking trails and a picnic area. It is free and open 24 hours a day.

The video that i recorded was at the Burial Grounds at Hans and Pat Suter Park off Ennis Joslin. The war cries started after i offered tobacco and while i dropping cedar.

I have a video that i recorded last year where you can clearly hear Apache War Cries. The Lipan Apache were also in the area, i am an enrolled member of the Lipan Apache Tribe of Texas.