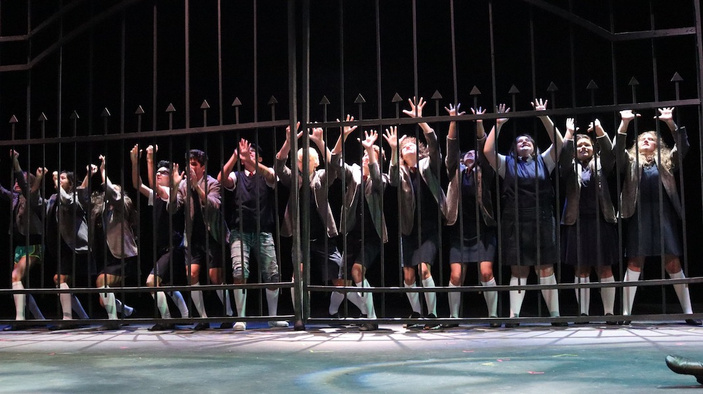 Students in Ms. Trunchball’s school in ‘Matilda the Musical’ as performed at Harbor Playhouse Community Theater in Corpus Christi try to make a break for it. Three community theaters in the Coastal Bend will produce four musicals and a murder-mystery this fall. Courtesy photo

Harbor Playhouse Community Theater announced its funny, horrifying, and classic fall lineup while rehearsals for the annual production of “The Rocky Horror Show” are underway at Aurora Arts Theatre across town. Port Aransas Community Theater on Mustang Island will perform “And Then There Were None,” an Agatha Christi thriller, in October as well.

Curtains opened on Roald Dahl’s “Matilda The Musical” on August 30. The tale of an extra-smart girl with extraordinary powers plays Fridays, Saturdays, and Sundays through October 6.

“Matilda” won 47 international awards and has played on Broadway. Now at Harbor Playhouse in the SEA District in downtown Corpus Christi, the musical recounts in toe-tapping harmony how Matilda overcomes bad parenting at home and a mean headmistress at school to find a new family for herself and happiness for her and her classmates.

Just in time for Halloween, Harbor Playhouse begins a run of “Evil Dead The Musical.” On Fridays, Saturdays, and Sundays from October 18-31, this hilarious and horrifying show embraces everything audiences love about cult horror classics.

Five college students unwittingly unleash an evil force from an abandoned cabin in the woods that turns them all into demons. In comes our hero, a housewares employee armed with a chain saw, to save the day. Be ready for dismemberment and blood, blood, blood.

The season concludes with the annual holiday classic “A Christmas Carol,” which runs from November 15-December 15.

Everyone knows the story, which has been retold in myriad ways from Muppets to Murray (Bill Murray that is, who starred in “Scrooged” in 1988). The Broadway musical will also make its way into your heart as the reawakening of Ebenezer Scrooge’s humanity unfolds on stage in a blaze of colorful costumes.

All Friday and Saturday productions begin at 7:30 p.m., while Sunday matinees are set for 2:30 p.m. Doors open a half-hour before curtain.

A Halloween classic, “The Rocky Horror Show” entertains audiences at Aurora Arts Theater every October. It contains all the elements of a true horror, musical, and comedy, starting when Brad and Janet are stranded in the rain after a flat. The eerie mansion where they take shelter leads them on a Frank-n-Furter adventure of song, dance, and devilment.

Tickets are $20 each, no discounts.

“And Then There Were None” plays Thursday, Friday, Saturday, and Sunday over two weekends: October 3-6 and October 10-13. Curtains rise as 7:30 p.m. except for the Sunday matinees, which begin at 2:30 p.m.

A classic whodunnit, “And Then There Were None” unfolds on a remote island where 10 strangers are murdered one by one.