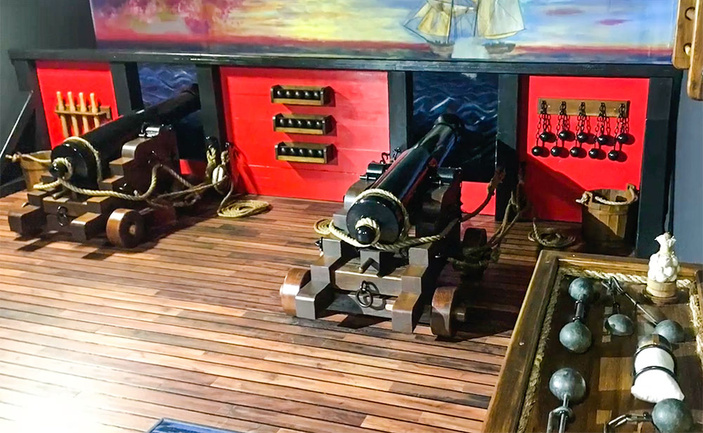 The new Texas Navy exhibit aboard the USS Lexington features a custom-made replica of a historic warship’s gun deck, a feature film, and so much more. Courtesy photo

Cast off for the USS Lexington’s newest exhibit. Learn all about the Texas Navy in this exciting 1,000-square-foot area covered floor to ceiling with handpainted murals of ships fighting the waves at sea. Visitors will also see a custom-made replica of a historic warship’s gun deck, cannons, uniforms, navigation gear, story boards, and more.

This exhibit has been four years in the making. In 2014, President of the Texas Navy Association Bill Turner met with USS Lexington officials to propose the onboard exhibit. Turner helped determine the space required and raise the money to make it happen.

Turner also wrote and produced the film “How the Texas Navy Saved the Revolution,” which will be presented in an adjacent 300-square-foot mini-theater.

This new exhibit was put together with the help of the Texas Navy Association. Formed under the authority of the Texas Secretary of State in 1972, the association’s mission is to “preserve and promote an appreciation of the historic character and heroic acts of the Texas Navy.”

The USS Lexington is open year-round, seven days a week, except Thanksgiving and Christmas days.