Sink a Puck with the IceRays 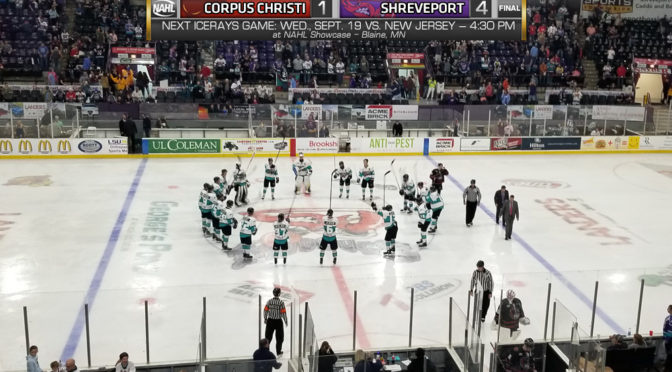 Sink a Puck with the IceRays

An aggressive sport with a lot of action, hockey has found a home in the heat and heart of Texas football country. With more than 20 years on the ice in the Coastal Bend, the Corpus Christi IceRays boast the largest, fastest-growing audience compared to the other 24 South Division tier II junior teams of the North American Hockey League. Annually, the IceRays draw an average of 3,000 fans per game for a total of about 100,000 attendees per season.

Fans love the show around the game as much as they love the action on the ice. Each year, the light show, music, videos, and entertainers up the game for even more excitement. Each home game features a promotional theme such as Frosty Fridays, Family 4-Pak Night, Heart Night, and Military Appreciation Night.

The players and the organization return the community’s support by giving back through creative and unique fundraisers and volunteering. Most are young players vying for a position in the National Hockey League. They billet in local homes and become part of the everyday of Corpus Christi.

The IceRays celebrated 20 years in 2018. The organization also hired a new coach, Ryan Cruthers, the fifth coach in two decades.

“My goal is to bring a Robertson Cup to Corpus Christi, develop our players, and move them on,” Cruthers said. “On the ice, fans are going to see a passionate group of players that will never have a question as to our work ethic and how badly we want to win.”

Keep up with the team by following it on social media (Facebook, Twitter, and Instagram). You can also watch or listen live online. Links can be found at goicerays.com.