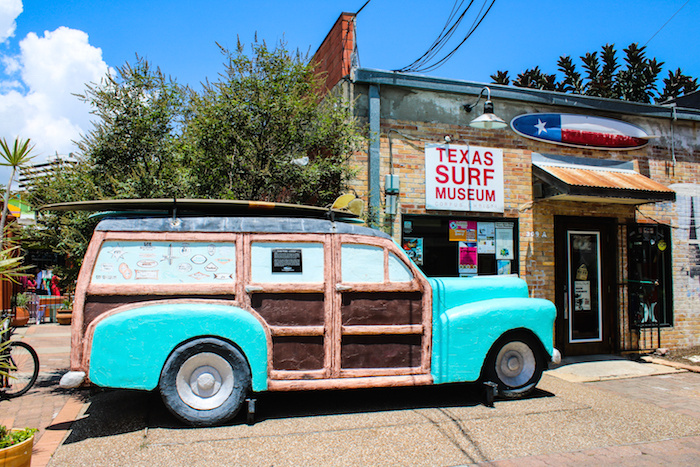 Outside the Texas Surf Museum in Corpus Christi, the only museum of its kind in Texas. Photo by JoAnna Kopp

Learn about surfing and help change the world. Visitors to the the Texas Surf Museum get more than enlightenment on the history of surfing in Texas; they are also participating in a nonprofit organization dedicated to preserving the environment along with a culture.

The entire museum is lined with surfboards, each with its own unique story. A mural depicting the Gulf of Mexico is marked with iconic moments in surfing. The exhibits feature historical tools, magazine and newspaper clippings, photographs and more.

Brad Lomax, owner of the the Texas Surf Museum, picked up the majority of the museum’s items from Pat McGee, a well-known Gulf Coast surfer who owns his own surf shop in Port Aransas. Lomax is the epitome of laid-back. When I first called him to schedule an interview, he said, “What if there’s surf? I can’t meet with you if I gotta go surf!”

At the time, I thought he was joking. But when I went in for the interview, I was set up instead with Liz McCampbell, the museum’s director of marketing. Lomax had gone fishing, she explained with a grin.

The Texas Surf Museum got its start as a record store with the surfing artifacts as a fun addition. Record sales began to dip as online music services such as iTunes emerged. The record store was scrapped and the space turned into a museum. The museum recently became a nonprofit and has used grant money to remodel an area for education. “We’re at a point where we can give back to the community,” McCampbell said. The museum’s new education program has been the main shift since moving to nonprofit status. It hosts many field trips throughout the year. Retired scientists help shape the museum’s lesson plans, which include the effects of marine debris, how waves and currents are formed, the physics of surfing and more. The museum even offers donation yoga classes every Sunday. 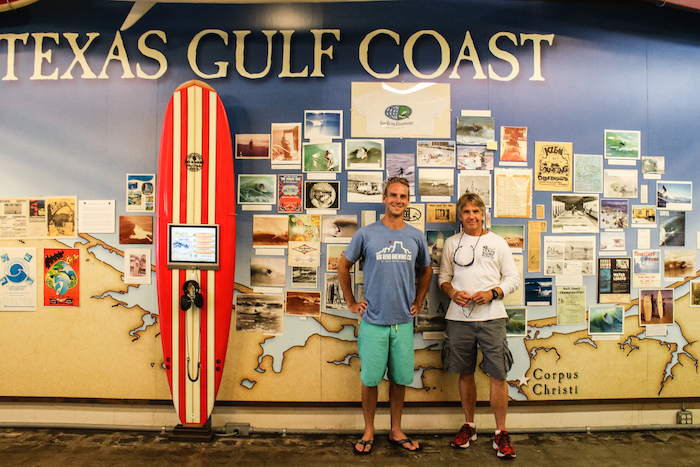 “The hardest part has been relaying our mission to the public,” McCampbell said. “We’re not just about surfing; we’re also about doing good.”

This is when she brought up the oyster shells. Lomax, who is quite the restauranteur, also owns Water Street Oyster Bar, the Water Street Seafood Company and the Executive Surf Club. Shucked oyster shells from the restaurants were at first thrown into the trash. Trash disposal comes at a high price, and Lomax wanted a more eco-friendly solution. He knew there was something else that could be done; something could certainly be recycled.

Lomax teamed up with Texas A&M University-Corpus Christi’s Harte Research Institute. Now, once oysters are shucked, they’re separated from the trash. Volunteers haul off the shells to dry out for six months. Once the shells are dry, they are set in estuaries in the Gulf to rebuild the coral reef.

McCampbell sees the museum enlightening people about the culture of surfing, making it a destination that is unique to surf culture. Charity and engagement is the future for the Texas Surf Museum. “

When we break even at the end of the year, did we just leave the lights on or did we change the community?” she asked.