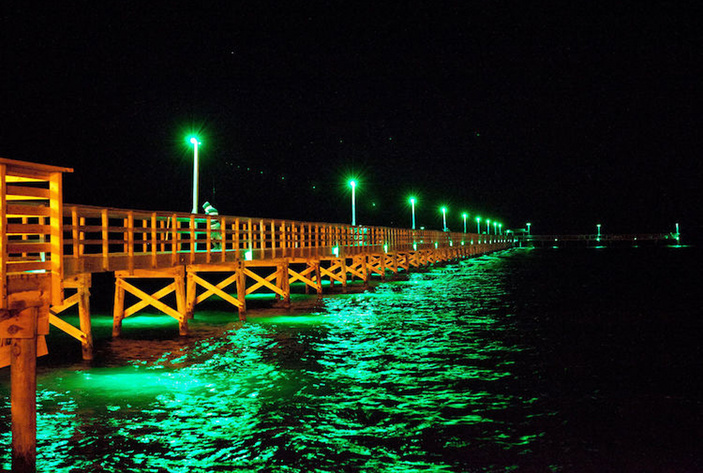 The nightlights on the Fulton Fishing Pier give a beautiful emerald glow to the 1,200-foot structure north of Corpus Christi. Anglers and visitors will soon enjoy pier upgrades. Courtesy photo

Fulton Pier overlooks Aransas Bay and is near the tip of the peninsula where Rockport is located. It is part of Fulton Beach Park, where you’ll find the Fulton Convention Center and nearby lodging, restaurants, and retail stores.

For now, the 1,200-foot pier is free and open to the public. A bait house is under construction and should be completed in the fall.

The bait house will offer small fishing items for sale, including lures, hooks, and fishing wire, and will also supply snacks to hungry fishermen and guests.

Once the commercial center is set up, a $5 fee per pole will be established, just as it was in the past. Anglers are allowed up to a max of four poles each. When no one is staffing the bait house, an Honest John box will be available.

Upgrades to the pier include a covered pavilion and LED fishing lights that cast a beautiful emerald glow on the deck and the water for night fishing. The new pier is also ADA accessible.

The $2 million reconstruction project was funded primarily by FEMA. The Texas Parks and Wildlife Foundation provided the 10 percent non-federal match with donations from Yeti and the Sid W. Richardson Foundation.