Swim safely with the jellies 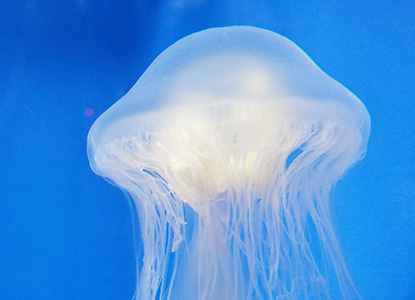 Moon jellies are one of the most common found in the Coastal Bend. The safest place to see that and more is the Texas State Aquarium in Corpus Christi.

Swim safely with the jellies

Jellyfish have inhabited Earth for more than 500 million years, making them the oldest multi-organ animals alive today. Almost 98 percent water, they are most common in coastal zones around the world and are certainly no strangers to the Coastal Bend region of the Gulf of Mexico.

The most common jellyfish found near Corpus Christi are the cabbagehead, moon jellyfish and stinging nettles. Both the moon jellies and stinging nettles can be found from late spring to mid-summer. Cabbageheads proliferate in late summer to early fall and are the least painful of the stinging jellies, mainly because they have no tentacles floating out behind them as they propel themselves through the water. Their nematocysts, or stinging cells, are short oral arms around their mouths.

The stinging tentacles on a jellyfish are designed to stun and capture food. They also protect jellies from predators. These beautiful, elegant and mysterious animals are predators themselves, eating zooplankton, eggs and larvae, small fish, crustaceans and other jellyfish — basically, whatever the ocean currents deliver to their mouths.

Sometimes that current brings a jellyfish to you, causing its tentacles to wrap around an arm, leg or torso, which hurts — sometimes a lot.

To best enjoy life along the coastal waters of South Texas, check out these five facts about jellyfish:

Unless the human victim of a sting has an allergic reaction, jellyfish stings are not lethal. Most common stings range from a just noticeable burn to an itchy rash.

2. Scrap off those tentacles first.

Use a credit card to scrap off the tentacles. You probably won't be able to see them, but if you are stung by a jellyfish, you can count on the fact that the tentacles are there.

You might have heard that urinating on the sting is the only thing that helps ease the pain. Guffaw! That has never been proven and isn't sanitary. When stung, splash saltwater on the area, then make a paste of meat tenderizer to apply to it. (Use unseasoned meat tenderizer!) Don't press on the skin. Apply gently. The meat tenderizer will quickly ease the pain.

4. Man-of-wars are not jellyfish (but they still sting).

Portuguese man-of-wars are those balloon-like translucent bubbles with long tentacles. It is not a single organism like the jellyfish. A man-of-war is a colonial organism made up of zooids, highly specialized solitary animals attached to one another. They are unable to survive on their own. The man-of-war lives on the surface of the ocean, with the "bubble" part above water and the tentacles below. Unlike the jellyfish, a man-of-war can not propel itself, so it is at the mercy of currents.

5. Treat man-of-war stings the same as you do jellyfish stings! (See 1-3 above.)

Don't let the presence of jellyfish in the ocean scare you off from having a good time. Stings are rare and easily treated. And jellyfish are not all bad. They are harvested for use in medicines and even as food.

Wish I would have looked up about Jelly Fish when I went down to Sea Brook area to meet my step mom. I didnt know about using a credit card to remove the tenticals. I got the itchy rash that slightly burned for a few days. I dont really remember it as it didnt hurt/bother me other then then first hour. That was back in the summer of 2001 about 15 years ago.. LOL

We were in Corpus and were stung by jellyfish on August 3rd, 2016. We used meat tenderizer that was given to us just prior to use getting stung. The lady had made a paste of this mixture for us to use just in case. Thank God she was there with this. "Meat tenderizer" is a seasoning that draws out the flavor of meats it is used on.

What do you mean by "meat tenderizer?"