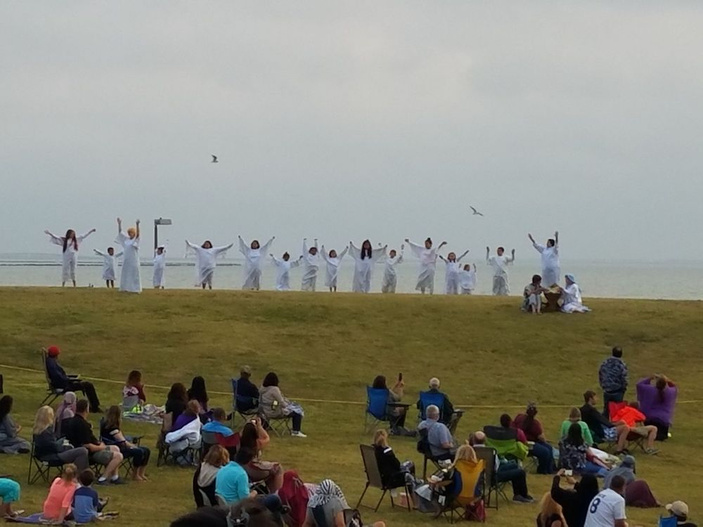 Angels appear on the hillside in Corpus Christi’s Cole Park at sunrise Easter morning as part of the annual Easter Sunrise Passion Play. The event is free. Bring your blankets and lawn chairs to the event, which starts at 7:20 a.m. Courtesy photo

As the sun comes up over Corpus Christi Bay, angels appear on a hill in Cole Park proclaiming the birth of Jesus Christ. Across the grassy hillside, people lounge on blankets and sit in folding chairs as a cast of about 100 acts out the Easter Sunrise Passion Play, a Corpus Christi tradition now in its 76th year.

The experience, which begins exactly at 7:20 a.m. this year, is co-produced by Debra Scott-Brown and Sue McCauley. Scott-Brown narrates the story, while McCauley directs. Both have been involved and played numerous parts over the years. Their families, including babies, have also been enlisted in past productions to play shepherds, apostles and angels to tell the story of Jesus.

“My son was baby Jesus one year, and now my grandkids are involved in it,” McCauley said. “It’s just a really awesome experience being on the bayfront in the early morning. You can feel the presence and the peace over the whole area.”

Performers mingle with the audience in the interactive production. When Jesus comes over the hill as an adult to begin his ministry, he calls the disciples, who are all sitting in the grass among the people. They get up one by one and come to him as he calls their names.

The action is backed by narration and a soundtrack produced by brothers John and Phillip Garcia. Like many in the production, they have been involved for years. John used to play Jesus.

For the past six years, that role has been performed by Max Mooreman, who, at 44, has decided it’s time to hand over the responsibility to someone else. To him, the role is more than a part in a play; it’s about having a relationship with God.

“Christianity is not a profession,” he said. “It’s a priesthood of believers. Everyone who believes is a priest. We are all part of the body of Christ, and we need to participate.”

As he prepares for his seventh time on the cross, Mooreman recalls his first time, when he had a day job that did not allow for facial hair. When he told his boss he needed to grow a beard to play Jesus in the Passion Play, he got permission and has not shaved it since.

Music plays an integral part of setting the mood and atmosphere on the hill in Cole Park. Tears and goosebumps are common during parts of the performance, McCauley said, noting in particular the scene in which Jesus walks up Golgotha Hill with the cross on his back.

“It’s a slow processional — you can hear a pin drop,” she said. “Except for the music, which is a drumbeat as he walks up the hill and the soldiers put him on the cross.”

As Jesus walks through the crowd ministering to the people, “Only a Miracle” by Kenny Loggins plays.

Narrating the performance is a spiritual experience for Scott-Brown.

“It’s very fulfilling knowing we are sharing the Gospel of Christ,” she said. “Its a beautiful experience. Very emotional. Every time I narrate, it’s like I’m doing it for the first time again. It’s a powerful story. In this time and age, it’s something for people to hold on to.”

Anyone interested can participate in the performance or be part of the audience. Admission is free. Those who want to volunteer should show up for rehearsals, which are 2-4 p.m. the three Sundays before the April 1 Easter Sunday performance in Cole Park. Rehearsals are March 11, March 18 and March 25. A final day-long dress rehearsal will be held on Saturday, March 31. Lunch is supplied.

“This is all done by donations,” Scott-Brown said. “No church is behind us right now. It’s all denominations. No specific church is in charge.”

Expenses include park rental for $750 and a sound system for $850. Costumes were donated by the Diocese of Corpus Christi, but new ones will need to be purchased as old ones wear out. Currently, the group needs new soldier costumes. All the props have been made by volunteers over the years.

“This is all teamwork,” Scott-Brown said. “People have donated their time and money over the years to make this happen. This year, a lot of people left and moved away, so we need more volunteers. We need a lot more youth. We need everyone from babies to adults to be part of this beautiful experience.”

Peace be with you!