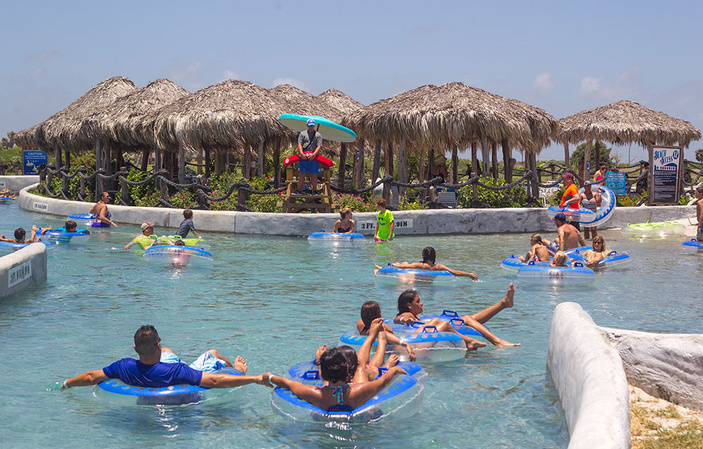 Schlitterbahn’s Kristal River is a serpentine, water-propelled river that wraps around the entire water park in Corpus Christi. Courtesy photo

Lay back and relax in an inner tube at either of Corpus Christi’s two premier water parks. Lazy rivers are a great way to soak up the sun between the high-adrenaline waterslides and wave pools available at both parks.

Schlitterbahn, the largest (and newest) water park in the city, has a massive lazy river. The Kristal River snakes around the entire park acting as inner-park transportation. All the rides in the park are incorporated into the river, so guests can ride the water from one attraction to the next.

Other attractions at Schlitterbahn include the Skyblaster, a 60-foot uphill water coaster that uses jets to shoot riders up, up and away; Blitz Falls, a whitewater tubing experience; the Boogie Bahn, a surf simulator; as well as beaches, a nine-hole golf course and tennis courts.

Other attractions at Hurricane Alley include Cat 5, a six-story slide complex; Storm Chaser, a four-lane racer slide; Shredder, a surf simulator; and the Storm Surge, an exhilarating wave pool.

A smaller park, Hurricane Alley is notably less expensive than Schlitterbahn, with admission starting at $10 and season passes at $79.99.

Schlitterbahn Corpus Christi is located at 14353 Commodore Drive on Padre Island. For more information, visit the website or call (361) 589-4200.

Hurricane Alley is located at 702 E. Port Ave. in the SEA District near downtown Corpus Christi. For more information, visit hurricanealleycc.com or call (361) 883-9283.