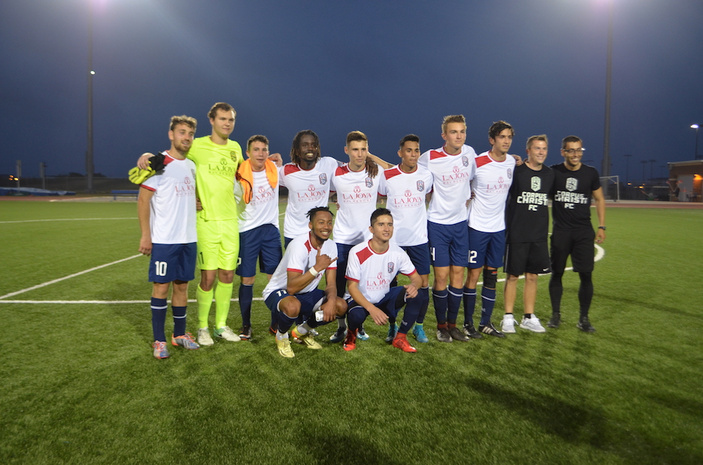 The Corpus Christi Sharks soccer team poses for a group photo after a successful first game against the Houston Royals. The Sharks took a bite out of the Royals with a 3-0 win. Photo by Jane Kathleen Gregorio

The most popular sport in the world (known as football around most of the globe) finally has a professional league of its own in the Coastal Bend. The newly formed Corpus Christi Sharks played their first game and captured their first victory as the city's first pro soccer team on April 12, winning against the Houston FC Royals, 3-0.

Already rich in soccer culture, Corpus Christi boasts more than 75 academic and youth teams, 70 amateur men's Sunday league teams, and a collegiate women's soccer team. As a professional soccer expansion team that competes in a nationally recognized league, the Sharks are a good catch for the city, which also has pro minor league baseball and hockey teams.

The idea for a local minor league soccer franchise came about in 2016 when a group of friends decided to form a professionally run football club in Corpus Christi. In early 2017 they registered the club's name, Corpus Christi Football Club LLC, and on October 23, the club was awarded an expansion franchise for the Coastal Bend region to play in the United Soccer League's Premier Development League.

The Sharks, which officially got its name from a Twitter voting contest, is owned and operated by local pediatrician Dr. Kingsley Okonkwo. With the help of the Texas A&M University-Corpus Christi Innovation Center and the university's athletics department, the dream of a professional team in the Coastal Bend became a reality.

The city quickly rallied behind the team, turning out to the Sharks' first exhibition game on a late Saturday afternoon in April. Ocean breezes across the green field of grass at TAMU-CC's Dugan Stadium offered a perfect setting for supportive sponsors, and passionate fans.

The turn out was huge and completely amazing," said team sales director Michelle Gallagher. Our sales and marketing department have worked hard, spending the past few months advertising, promoting, and acquiring sponsorship. Now, it's like all the fruits of our labor are rewarded by the loud cheers of this crowded stadium."

Seating was filled to capacity with fans decked out in team colors of blue and red, many wearing Corpus Christi FC shirts, PDL scarves, and other swag. One fan sported a shark-head hat, a fashion accessory that is likely to catch on as the season progresses.

Clarissa Serna kicked off the action by singing the national anthem. Serna is an acclaimed singer and Rock 92.7 on air personality. Music was provided by DJ Chris Fonseca, an on air personality from Hot Z95 Studios.

We wanted to use local talent to foster a Latin music inspired atmosphere," Gallagher said. It's a theme that is part of the cultural fabric of Corpus Christi." 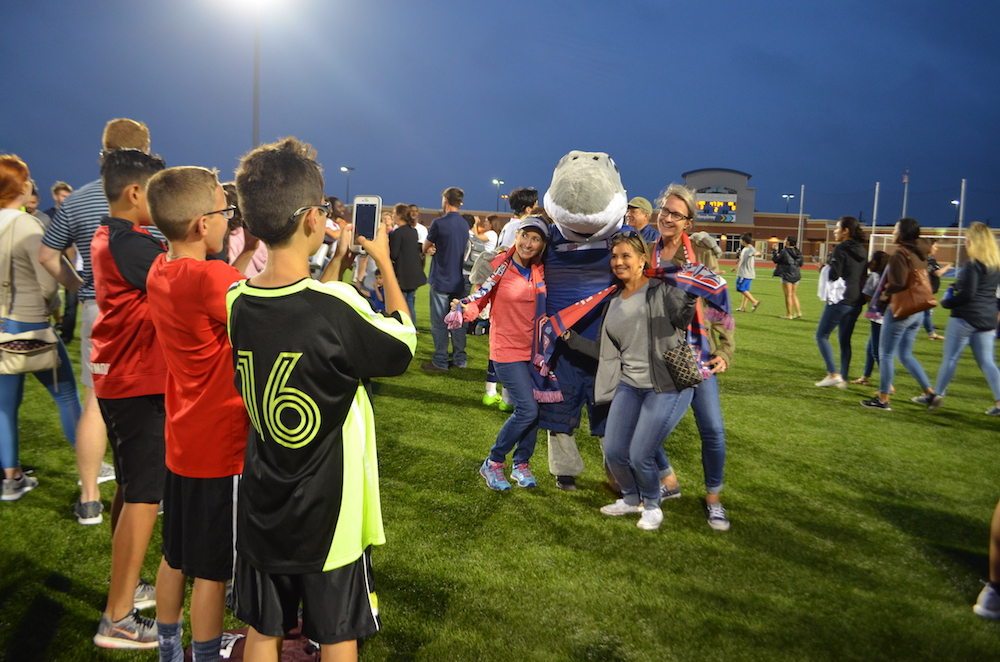 Within the first eight minutes of the first game, the Sharks scored its first goal against Houston, sending the audience into a frenzy. Among those feeling the Shark-fin pride was web developer Eisen Shawa.

It's so rewarding to be part of this organization," Shawa said. I have loved soccer all my life, I played it growing up. I love the family atmosphere, and even though my role with the group is behind the scene, I've watched it grow. I feel so much gratitude to be part of this family, this team." 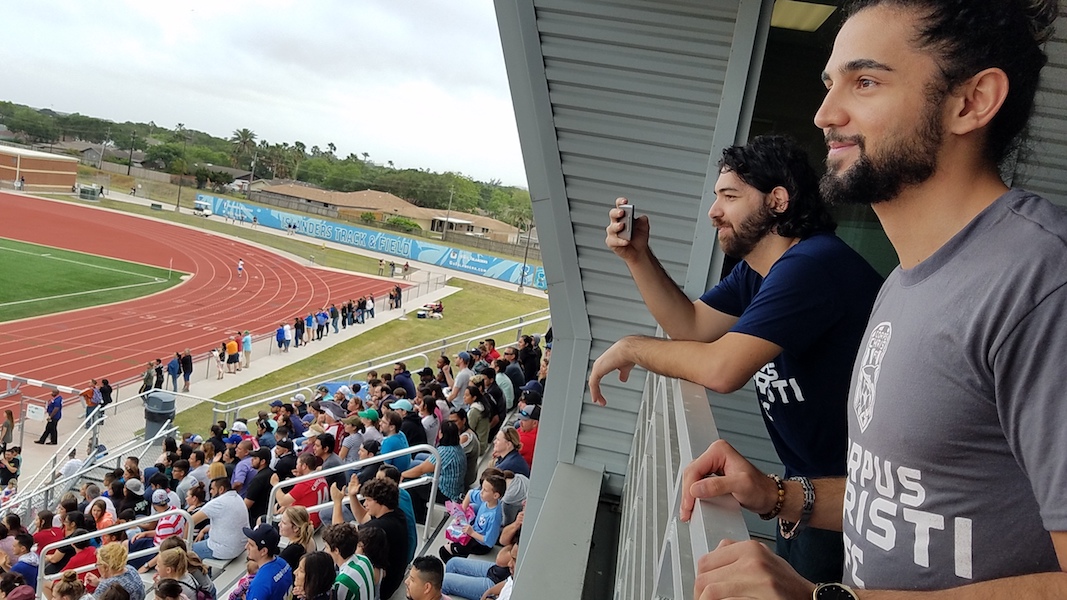 Cheering alongside Shawa while shooting video clips for the team's website, was Artug Altug, the Shark's social media assistant.

Our website, facebook page, and social media provide other outlets for connecting with fans," Altug said. So, on this first game, I'm uploading footage right away in real time, so viewers can relate and feel the hype. We want our social media posts to be very clear to read and for our graphics to stand out, while incorporating the cultural values of Corpus Christi."

Also on hand was communications director Hugo Marciales, who joined the organization this past January.

Right now, people are enjoying the game and seeing a great turnout, but what they don't realize is the teamwork and collaboration that exists behind the scenes," Marciales said. This team, this game, is a result of everyone working together to get things done. All the marketing, public relations, community outreach to charity groups, coordinating sponsors, operations, logistics, social media, and even deciding the mascot - it's a mountain of work and many moving parts.

The secret to their success, said Marciales, is that they love what they do. That shared love for the game helps offset the hard work that comes with coordinating the city's first professional team.

Suddenly, the hard labor is fun," he continued with a smile. And being involved at this high level of the sport, is like a hobby. Who doesn't like to work for his hobby?"

Creating a professional soccer team in Corpus Christi not only gives the community a sense of pride, but also offers young players a unique opportunity to gain valuable experience, exposure to recruiters, and potential career advancement.

The program we have allows young players to have opportunities to move on to higher paths," Marciales said. It allows the youth talent to keep playing at college, and if they decide to go pro, the league allows them to keep playing at a higher level without breaking the rules or losing NCAA eligibility."

The Sharks not only have players from around the world and from different universities, the team also includes four local players. 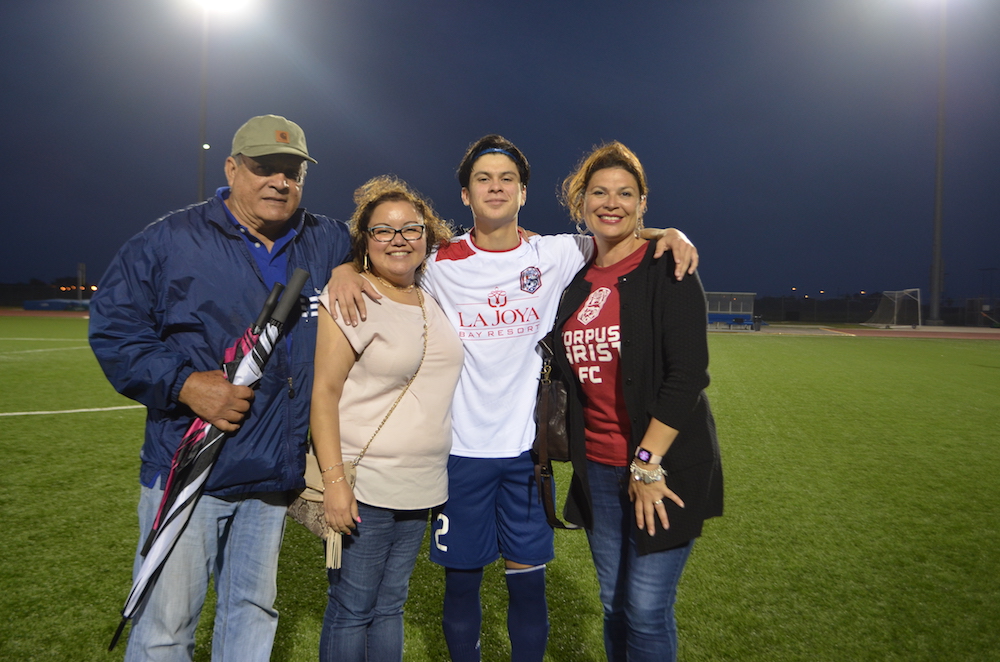 The youngest player on the team, Karlo Lopez, is a local player. His family came down to the field to congratulate him on the first game victory April 12 at Dugan Field. Photo by Jane Kathleen Gregorio

The youngest is Karlo Lopez, Corpus Christi, who just turned 18. The others are Karo Azali, Flour Bluff; Cesar Garcia, Calallen; and Seth Korenek, Ray. Coach Sammy Giraldo and assistant coach Sebastien Giraldo, have trained youth soccer players in South Texas through their business, Giraldo Elite Futbol, for several years. Including young soccer fans in every aspect of building the Sharks is all part of teams' vision.

One of the things we try to do is to approach the youth soccer leagues and teams to be a part of this," he said. We also invite kids and the underprivileged from local charity organizations, like CASA or Ronald McDonald, to attend our home games and cultivate within them the love of soccer. We want new people to discover and enjoy the game, and know what it's about."

He pointed out the packed stadium, which holds about 1,000 people.

This tells us that we have the support of the community," he said. I love it."

At the final whistle, as everyone celebrated this first game and victory, youngest player Karlo Lopez reflected on the experience playing his first PDL game.

It's different than any other game I ever played," he said. I really love working with my team mates. We are all friends. As for other team, I don't think they played at our level. We played more of a possession game, which gave us a lot more opportunities. I felt our coaching was at a higher level. I'm looking forward to next game and what comes next." 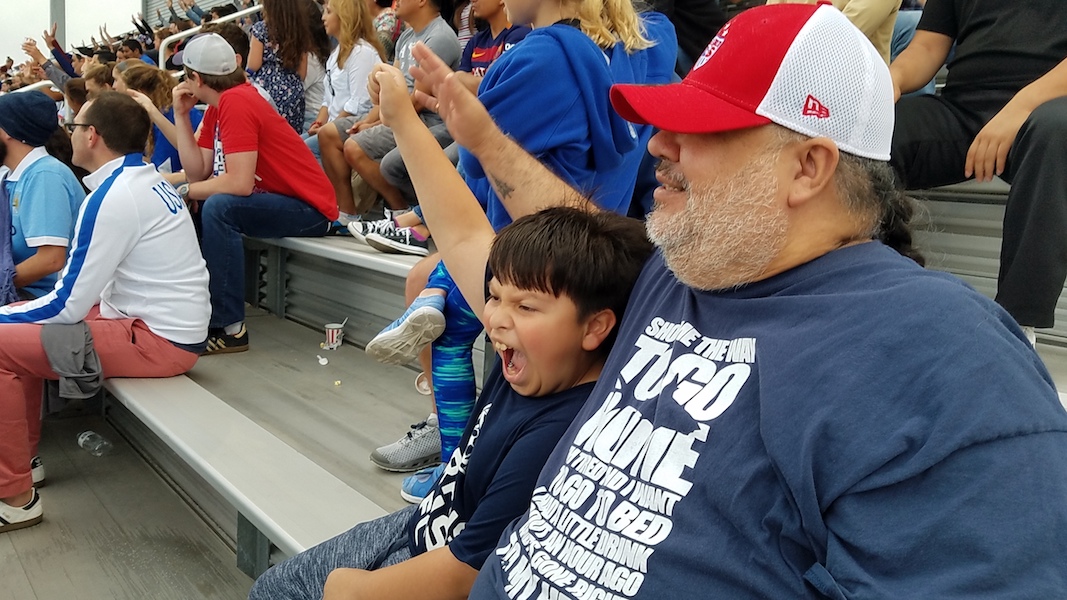 Samuel Moran and his nephew, Eric, are happy to have a local soccer team to enjoy. Samuel Moran has driven as far as Dallas to see professional soccer. Photo by Jane Kathleen Gregorio

As the the Sharks' first competition came to an end, Samuel Moran who attended with his 9-year-old nephew, Eric Moran, was happy to share this moment with the next generation.

I've been in Corpus Christi for 20 years, and am a long time soccer fan," said Samuel Moran, who used to drive four or more hours to Houston or Dallas to watch professional soccer. It's great to have a local team to support from their beginning. I brought my family here because soccer is a family game. I feel it's a lot more exciting then American football. My hope for younger generation is that they get more into it, start playing."

I'm happy my uncle brought me here," Eric Moran said. I love being here at the first time soccer game ever. Almost everything is my favorite part."