Turn the kids loose on a city park playground 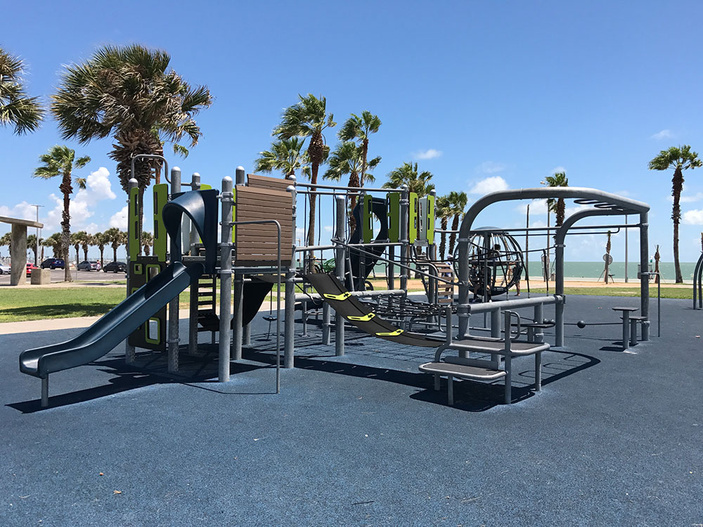 Turn the kids loose on a city park playground

The latest playscape in Corpus Christi educates while providing a great place for kids to let loose. The Pollinator Playscape’s design includes local plants, a water feature built to attract wildlife beyond the human kind, and structures made with natural materials to replicate logs, stumps, and balance beams.

Parks like this one in the Oso Bay Wetlands Preserve could be why the city is regularly ranked tops in parks per capita in a couple of national beauty contests — Corpus Christi obviously reveres its parks, pools, and playgrounds.

Whether basking on a beach or skipping through a splash pad, Corpus Christi park activities are as varied as the people who live and visit here.

Visitors tend to travel to the city’s beaches on Mustang and Padre islands as well as North and McGee beaches downtown. Meanwhile, more than 190 parks and amenities intrigue and excite those with a thirst for adventure and a knowledge of the city’s other, more inland playgrounds.

Between Artesian, Cole, and Labonte parks, there are plenty of family-friendly locations to engage, entertain, and excite.You can plan an event at one of the many playgrounds, rental facilities, and beachside pavilion areas in Corpus Christi. Or, take a splash at Collier or one of the other numerous pools after visiting the dog park. In Corpus Christi, it’s easy to kick back or kick off in a local park or pool. Maybe you’d like to try them all:

The city’s first park, which is indicated with a historical marker. 400 Twigg St.

This one is on The Island and home to a community garden. 15601 Gypsy St.

A recognized birding site, Blucher Park is in downtown next to the Central Library. It’s a favorite of migratory birds due to its vegetation and stream despite its small size. 209 N. Carrizo St.

Cole Park is one of the larger city parks and includes playgrounds, a skate park, a windsport launch, and an amphitheater. A bayfront park, it is also popular with fishermen who like to use the pier. Unfortunately, the pier is closed for the time being due to infrastructure problems. 1900 Ocean Drive

The refuge features a 1-mile nature trail and an 800-foot boardwalk with excellent opportunities for bird- and wildlife-watching. It includes picnic tables and viewing platforms throughout. An especially unique feature in the park is the storyboards and medicine wheel, built to honor the Native Americans buried at one of the state’s largest Indian burial grounds at Ennis and Joslin. A local group holds a funeral march and prayer vigil at the medicine wheel each year to honor the dead.795 Ennis Joslin Road

The park features a playground, a swimming pool, and, soon, a hike-and-bike trail. Corpus Christi City Council approved $300,000 for the trail in January 2018. 4305 Greenwood Drive

Labonte Park sees its biggest number of visitors at Easter when campers line the river banks and fill in around the picnic tables for barbecues, fishing, and play. Reservations are needed. Call (361) 826-7529. 14333 Interstate 37 Access Road

Also known as Duck Park by the locals, this Southside park’s duck pond is a favorite for kids coming to watch and feed the ducks. It includes a playground and areas for quiet repose. 2098 Rodd Field Road

Play a round of disc golf at Lamar Park, a great recreational area that shares its name with a neighborhood and shopping center in central Corpus Christi. 4231 Santa Fe St.

The 162-acre preserve offers birding and other wildlife programs on a regular basis. It includes a learning center and 2 miles of nature trails. It’s a great place to expose kids to the world of nature. 2446 N. Oso Parkway

A Play-For-All Playground, Salinas Park was designed to fit the needs of all families, including those disabilities. Includes an outdoor instrument area and a zip line that will seat most special-needs children. The $300,000 park was funded by the U.S. Department of Housing and Urban Development and a Community Development Block grant. 1354 Airport Road

The park is the site of the city’s military celebrations and part of the newly renamed The Water's Edge Park. It includes a historical marker. 222 S. Shoreline Drive

This park includes a public tennis facility (it’s not lighted for night play). Call (361) 826-3460 to find out about registering to play with tennis partners. A wide-open park, St. Andrew’s is great for family and group activities and picnics. 5902 St. Andrew’s Drive

The pool at West Guth Park reopened after extensive renovations in July 2018. New water features were added, including a climbing wall and a new pump room with zero-depth entry pool. The pool is open for a general summer swim schedule from 1-6 p.m. Wednesday-Sunday. West Guth is a year-round pool. Call (361) 826-1723 for more information. 9725 Up River Road

Open mid-June to early August, it has a triple waterslide, a three-rides-in-one concept featuring the Swirl, the Deep Drop, and the Three Loop. (361) 826-1729, 4305 Greenwood Drive

The pool at West Guth Park reopened after extensive renovations in July 2018. New water features were added, including a climbing wall and a new pump room with zero-depth entry pool. The pool is open for a general summer swim schedule from 1-6 p.m. Wednesday-Sunday. West Guth is a year-round pool. Call (361) 826-1723 for more information. 9705 Up River Road

Another popular park is Dolphin Park on the north end of North Beach at 200 Sandbar Ave. It offers paved parking and a wooden boardwalk leading to a mile-long beach, a granite fishing jetty and a concrete Beachwalk. Talks are underway in the city to improve and expand the playground which currently has a swing set.