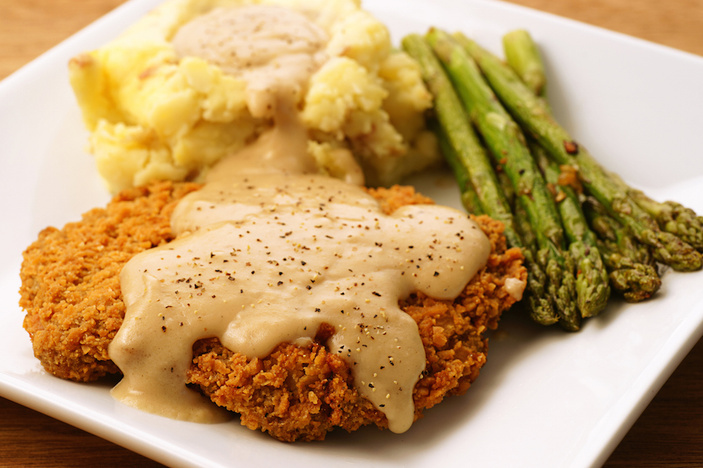 The best chicken-fried steak in Corpus Christi or anywhere comes with a rich, creamy gravy poured over crunchy goodness with a tender, tasty texture.

The technique of frying steak began as a means of making a cheap cut of meat edible. The challenge is taking that a step beyond to a melt-in-your-mouth dish of deliciousness.

Round steak run through a tenderizer, better known as cube steak, is the most popular of the cheap cuts used. You will also find fried sirloin tip, bottom round or eye round. The work begins with the pounding. Some use a meat mallet, while others go at their steak with a rolling pin. The goal is 1/8- to 1/4-inch thick pieces of meat.

The next step, and perhaps the most important, is getting the batter just right. Batter battles are regularly waged over the use of milk vs. buttermilk and whether you should add an egg. We found the best are dredged first in plain flour, then into an egg and buttermilk mixture, followed by a second coating of seasoned flour. Season to taste. We like salt, onion powder, garlic powder, black pepper and paprika. Add cayenne if you want your steak to bite back a bit.

The best chefs rest their steak on a wire rack so the coating will stay attached to the meat when it finds its way into the fryer. The only other way to keep that coating from pulling off the meat is to deep fry it in a dutch oven. Make sure your oil is light (vegetable oil is best) and hot before you dip in your steak. It should sizzle and float until it reaches crispy brown perfection, which won’t take long.

For those who don’t want the mess of making a chicken-fried wonder in your own kitchen, Corpus Christi restaurants offer some of the best chicken-fried steaks to be found in Texas. The fun is in the quest for what you consider best.

A great place to start is Nolan’s Restaurant at 2330 Airline, named one of the top 10 best chicken-fried steaks in Texas by the San Antonio Express-News and mySA.com. Locally owned and operated by Nolan Culp — both senior and junior — Nolan’s cooks up a crispy, thin steak with a thick, tasty gravy that draws hungry hordes from across South Texas. A second location at 14101 Northwest Blvd. in Calallen provides even more opportunity to taste-test it yourself.

“We bread it per order,” said co-owner Nolan Culp Jr. when asked what sets his CFS apart from the rest. “Most restaurants pre-bread.”

In business 50 years, Nolan Jr. said the same great steak can be found at both restaurants.

“In other parts of the country, you have fried chicken,” he said. “In Texas, we have chicken-fried steak. It's a wholesome food, tenderized and breaded. It's good.”

AND THAT’S NOT ALL

Want to try out some of Nolan’s competition in the chicken-fried goodness category? Here are few other places that you might consider in the category of best chicken-fried steak in Corpus Christi.

They call it country-fried steak at Andy’s, but it is indeed fried crisp and crunchy like the best in fried chicken. You can get it with eggs or cowboy style topped with chili, cheese and onions. The country-fried lunch or dinner version is hand breaded in the kitchen, made with tenderized sirloin and topped with country gravy.

Yes, they specialize in chicken, but that just means they know how to fry! They not only serve a top-notch chicken-fried steak, but also feature fried chicken livers and 11 different side orders and vegetables. Add some fresh buttermilk pie for dessert.

There's also a kitchen machine which is called "Fast Cutlet Maker" that flattens the flesh and form a nice cube pattern on it. It is popular in Poland.