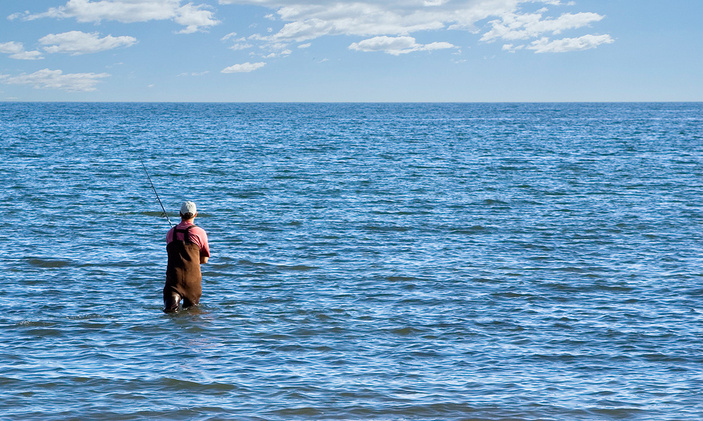 An angler fishes along the shoreline on the upper Laguna Madre, which begins in Corpus Christi and covers 40 miles of bay and wetlands to the south.

Stretching 130 miles south from Corpus Christi to the Rio Grande, the Laguna Madre offers fishermen the highest population of finfishes on the Texas coast. Its clear, shallow waters are the most hypersaline of any lagoon in the world, a distinction that is well-known among ocean researchers. In fact, only five other similar bays exist anywhere on the globe.

While that distinction might not be widely known among those who do not study the bay, anglers certainly know of its effects on their favorite hobby. The bay promotes the growth of seagrass beds, which leads to a fertile environment for growing elements of the food chain that, in turn, promotes growth in the fish and bird populations.

The Laguna Madre remains a major habitat for wildlife because more than 70 percent of its shoreline is protected by federal entities. It is bordered by Padre Island National Seashore, Laguna Atascosa National Wildlife Refuge and the King and Kenedy ranches, which are privately owned and undeveloped. The National Park Service calls it “one of the most overlooked natural wonders in North America.”

Five species of seagrass in the area account for 80 percent of remaining seagrass habitat in Texas. These grasses — turtle grass, shoal grass, manatee grass, star grass and widgeon grass — are nurseries for larval, shrimp, crabs and juvenile fish as well as protective cover and feeding grounds for adult fish.

The only strain of high-salinity-adapted oysters in North America call the Laguna Madre home. Its waters provide the only natural rocky shoreline in the state along with the only serpulid worm reefs, which are more than 300 years old.

The abundance of food it provides has made the Laguna Madre the most productive bay fishery in the state, providing some of the best recreational fishing for red drum, black drum and spotted sea trout in North America.

Spotted sea trout are by far the most popular fish in the bay, especially in the upper Laguna Madre near Corpus Christ. Anglers also cast for red drum and black drum. The populations of both these fisheries have surpassed spotted sea trout in the past five years.

Snook, gray snapper, Florida pompano and barracuda, which are not found in the upper Laguna Madre or most other Texas bays, are prolific in the lower Laguna Madre in South Texas.

Also feeding from the prolific salt grasses are a plethora of birds, including 75 percent of the world’s population of redhead ducks, which winter there. Endangered species finding a safe home among the grasses include piping and snowy plovers, white-tailed hawks, reddish egrets, peregrine falcons and brown pelicans.

These fine-feathered friends come to the Coastal Bend for its wind-tidal flats and barrier island beaches — the largest continuous expanse of suitable habitat in North American between their northern breeding grounds and wintering grounds in South America.

With a 130-mile stretch of habitat, the Laguna Madre is home to some of the most extensive colonial water bird rookeries (bird colonies) in Texas. 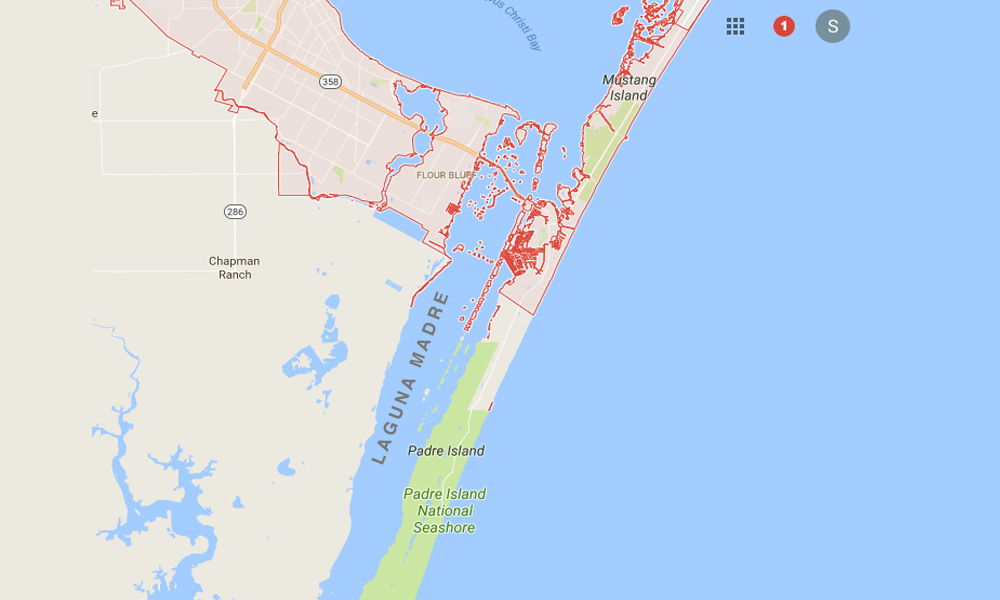 Upper Laguna Madre separates mainland Corpus Christi from Padre Island, which is also in the city limits. Most of the bay is bordered by undeveloped land.

The Laguna Madre derives its name from an explorer who recognized it as a wildlife cornucopia. As the first European known to see the bay, Spanish Capt. Alonso de Pineda named it “Mother” in honor of its fecund nature.

The entire lagoon is actually two bays divided by 20 miles of inundated mud and sand flats known as Saltillo Flats, or Land Bridge. The upper Laguna Madre is about 40 miles long. It was joined to its lower portion by the Land Cut in 1949, when the Gulf Intracoastal Waterway was completed.

Its shallow waters are perfect for wade fishing; its many inlets ripe for fishing by boat. For those who do not know their way around the bay, fishing guides are abundant and easy to schedule.