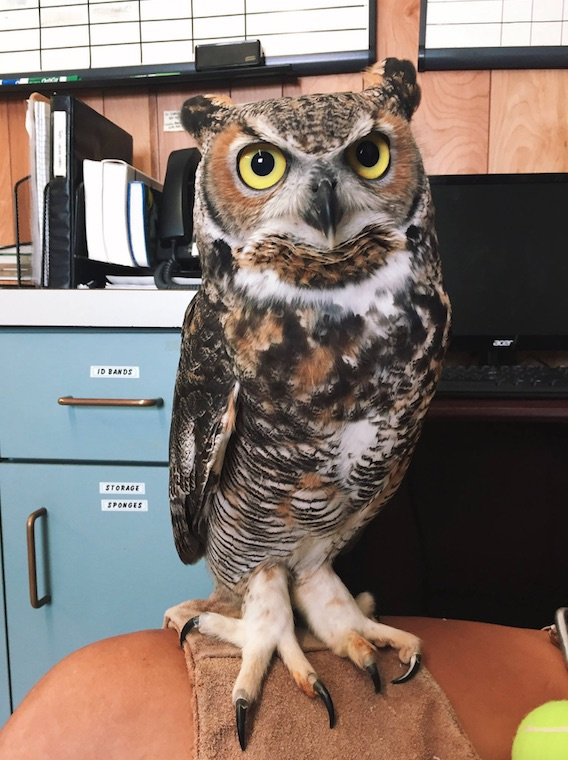 Stump, aka ‘Great Horned Owl #201-051,’ came into Second Chances Wildlife Rehabilitation as a baby with an injured wing. Despite being unable to fly because of a necessary amputation, Stump is healthy and happy and looking for a forever home. Photo by JoAnna Kopp

As Alex Little sits at her work desk, a great horned owl nicknamed Stump sits in her lap, playing with her keyboard, sometimes jumping up and climbing across her paperwork. Little is a wildlife care specialist for the Texas State Aquarium’s Second Chances Wildlife Rehabilitation program in Corpus Christi. Stump is one of the more than 4,000 patients that Second Chances has helped since it opened in 2005.

The most common injuries to shore birds, raptors, turtles and other marine animals brought into the program come from being hit by cars, entangled in fishing line or orphaned by their parents at too young an age.

Animals trapped in monofilament fishing line frustrate the animals’ caregivers the most, said Laura Martinelli, manager of Second Chances. Most anglers prefer monofilament line because it is lighter, stronger and practically invisible underwater. These same attributes make monofilament especially deadly to marine life when it is not disposed of properly.

“Entanglements are 100 percent preventable and the most difficult to treat,” Martinelli said.

She opened a kennel to show a distressed pelican that had been in their care for over a week. When the bird was brought into Second Chances, it was completely wrapped up in monofilament. Once the pelican was freed from its trap, they expected a fast recovery, but that was not the case.

“He wouldn’t eat,” Martinelli said, “After day five, I was trying to force feed him when I saw down his throat there was a fish at the end of a hook, tangled in even more fishing line.”

The Texas State Aquarium has partnered with a funding program facilitated by Texas Stream Team, a network of trained volunteers gathering information about the state’s natural resources. The program helps find and remove monofilament from Texas waterways. Together, the two entities have created programs for monofilament recycling and angler education.

“Besides entanglements, it’s frustrating when people bring in baby birds,” Little said. She explained it’s a common misconception that baby birds are abandoned after being touched by a human. “A lot of times, parents will nest two to three miles away from their normal location. They’ll end up nesting in neighborhoods or along the side of the highway. A person will see the babies, think they’re not supposed to be there — think they’re rescuing them by bringing them here — but the best thing to do is leave them with their parents.”

Stump came to Second Chances as a baby with the majority of his wing missing. He benefited from the program’s newly funded, fully equipped surgical suite, where the staff veterinarian treats fractures and internal injuries as well as performs dental work. After surgery to remove his damaged wing, Stump is healthy and happy but non-releasable because he will never fly again.

Little and Martinelli are looking for a new home for their feathered friend. All non-releasable animals are eventually placed with the Association of Zoos and Aquariums or with another zoo or aquarium with high standards.

Giving up Stump will be hard, which is why employees and volunteers are discouraged from bonding with the patients.

“It’s an emotional job,” Little said. “They say you shouldn’t get attached to them, but if you don’t, you’re not in the right line of work.”

Little and Martinelli are with the animals from rescue to release.

“I can take an animal that’s almost dead and help it become healthy and thriving,” Little said. “I love doing rehabilitation because it’s the most tangible form of conservation.”

The work is hard but rewarding. Martinelli starts her day at 7 a.m. Her first priority is feeding, medicating and cleaning the animals and kennels. Surgeries, bandages and treatments are scheduled for the afternoon. By 5:30 p.m., patients receive their nighttime medications.

“We keep very meticulous notes,” Martinelli said. “What food they’re eating, their weight, body condition. That’s how we can keep track of their health or see when an issue starts.”

Once a patient is healthy and able to survive on its own, the workers and volunteers prepare to release it back back into the wild close to from where it came.

“We determine if they’ll be able to survive and thrive on their own — hunt, fly, escape predators,” Martinelli said. “Then, we release.”

“I love the program,” Little said. “Second Chances strives for excellence, is always improving and puts in 100 percent effort.”

The Second Chances program is a community-driven service. Anyone who finds an injured animal or has general questions about wildlife, should call the hotline at (361) 881-1210.