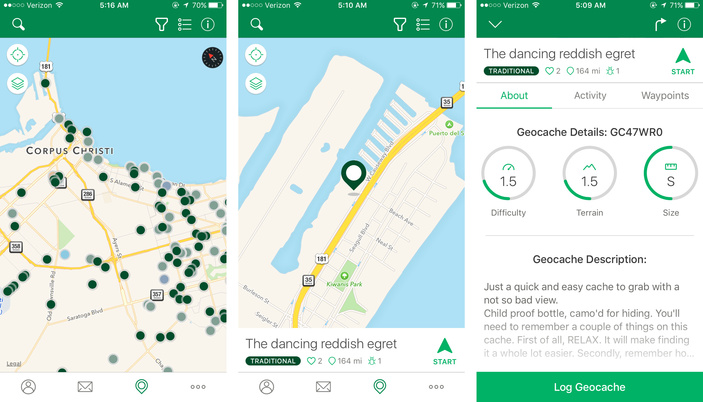 The Geocaching app is a wonderful tool in your search for hidden treasure.

Geocaching is a modern-day treasure hunt that takes no more than a smart phone, some detective skills and a sense of adventure. Thousands of geocaches are hidden all over the country just waiting to be discovered — hundreds of them are right here in Corpus Christi.

“I didn’t want to spend money, but I wanted to have fun,” said Andrew Ortega, an Austin resident who discovered geocaching on a trip to Corpus Christi with friend Alicia Turner. “We rode our bikes around, followed the map, and found the geocache.” That was two years ago and the couple has since found over 80 geocache treasures.

Here are their tips to help you geocache like a pro:

Several apps are available for geocaching, but the one by the official geocaching website is by far the best. You can opt for either a free intro version or a full version that costs $9.99. Beginners should download the free app first. Tip: the app will seriously drain the battery on your phone. Bring a back-up charger if you’re planning a full day of treasure hunting. For bonus help, visit the online forum and get involved with the geocaching community.

2. Choose a cache and hunt it down

When you open the app, you’ll see your city turn into a treasure map littered with dots that indicate cache locations. Tap one to view details on difficulty, terrain and size as well as comments from other geocachers. Once you set out, the app uses GPS coordinates to lead you in the right direction. Once you’re in the cache’s general area, you’ll have to follow clues to find the exact spot. Sometimes caches can be spotted easily, but most of the time they are hidden, buried or even tied up in a tree. 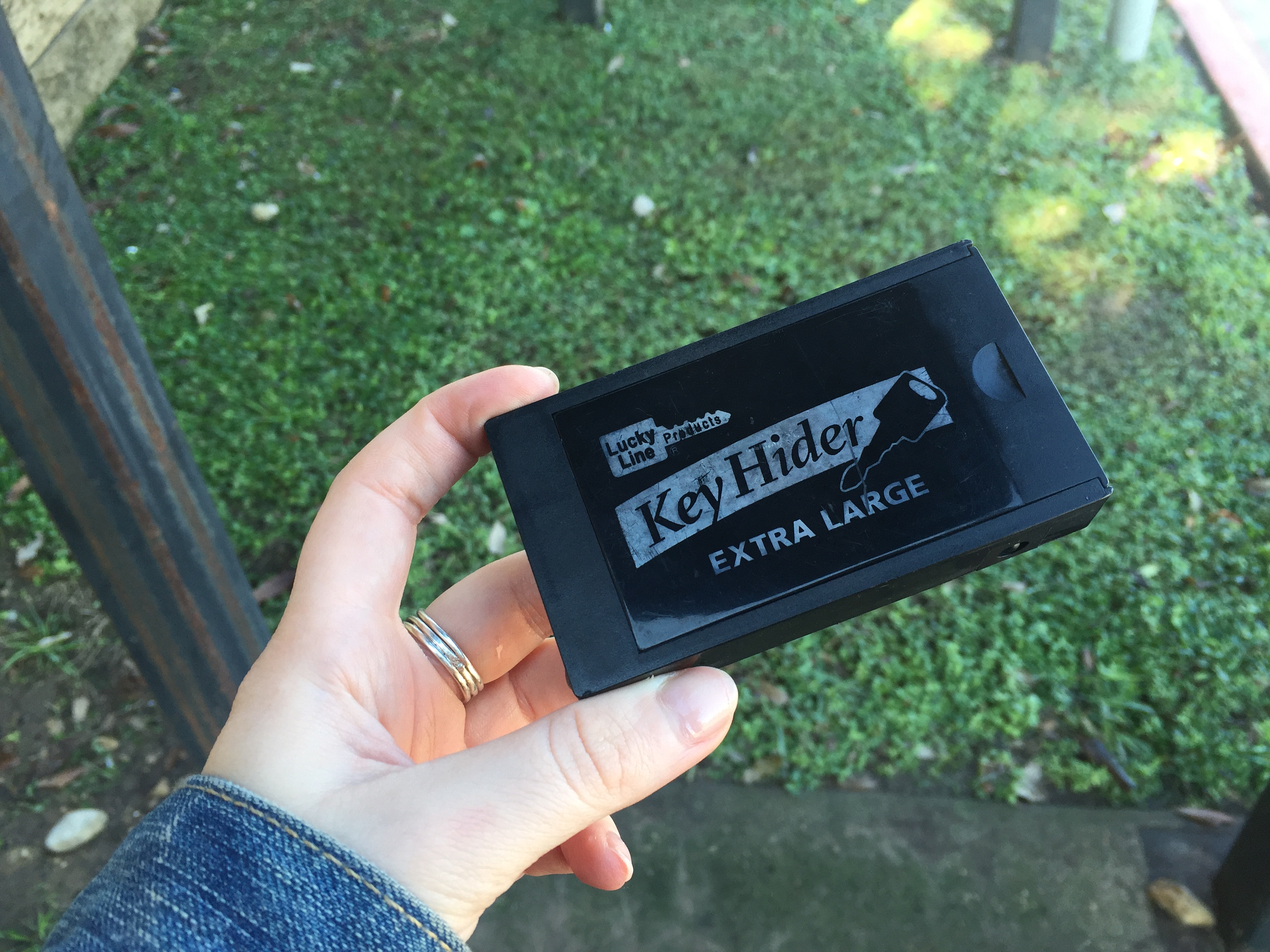 Caches come in all shapes and sizes. This one is somewhere between “small” and “micro,” but they can get as large as a shoebox. Photo by JoAnna Kopp.

Ortega describes their first cache catch in Corpus Christi: “It was a magnetic metal box attached to a mile marker on the beach,” he said. “There was a charm inside. I don’t remember what it was—”

“—It was of two swans kissing, their necks forming a heart,” Turner interjected. “It was really sweet.”

Objects vary from cache to cache. Ortega and Turner have found containers filled with string, pill bottles stocked with finger puppets, boxes brimming with bottles caps and other oddities. “Sometimes there are notes in the cache, usually describing the significance of an item,” Ortega said. “One time a note said ‘take me to a new location,’ so we found a new location for it.”

In every geocache, there will be a ledger where treasure hunters can sign their name and date. “Sometimes a pencil is in there, but you should bring your own,” Turner advised. “I always bring something to put in the cache, too, like 25 cent vending machine toys. It’s never anything special, but it’s nice to leave something behind for the next person.” 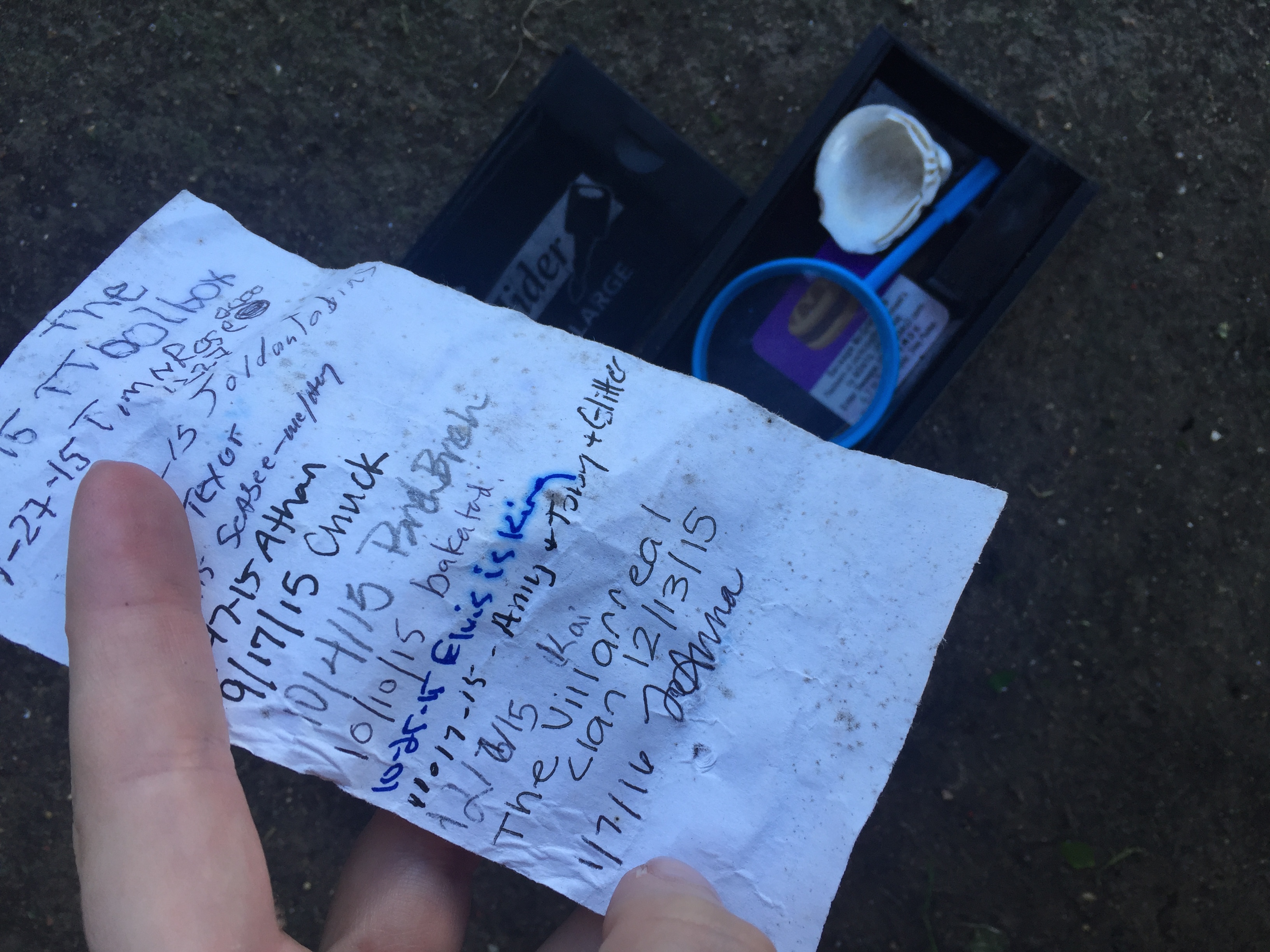 Sign the ledger, leave your own memento (like a seashell!) and put the cache back where you found it. Photo by JoAnna Kopp.

“The downside is that sometimes you just can’t solve it, or the cache isn’t even there,” Ortega said. “Or the clues are wrong, or the cache is really lame. It can be discouraging, but I think even a bust is part of the fun. When you do find a cache, especially a really cool one, it’s a more memorable experience. So far we’ve found 87 all around Texas. I think it will be a lifelong hobby.”