Pray at a historic church 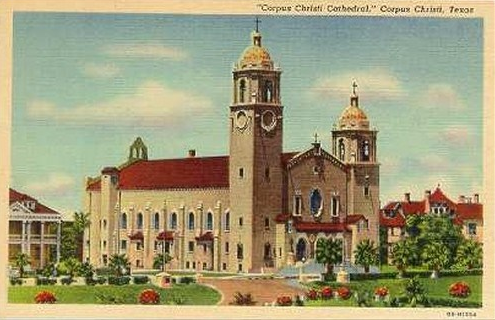 An old postcard of the Corpus Christi Cathedral.

Pray at a historic church

The history of Corpus Christi is deeply rooted in the religious culture of its first citizens. The city was named Corpus Christi, which is Latin for “The Body of Christ,” by the Spanish settlers who first colonized the land in 1847. Many of the historic churches built here in the 19th century are still in operation with thriving congregations.

Founded in 1846, this church is the oldest in Corpus Christi. It is an iconic symbol of the region with its "surfing Jesus" statue, which is actually Jesus standing in a small boat. A beautiful work of art, the statue faces the bayfront on Shoreline Drive.

(Now a part of Our Lady Star of the Sea)

St. Patrick’s is the first Catholic Church of Corpus Christi and is named after the Irish immigrants who worshiped there. After its founding in 1853, the church became a landmark when it was officially dedicated in 1882. In 1912, Old St. Patrick’s Catholic Church was chosen as a cathedral — meaning it houses a seat for a bishop — a very high honor. A new cathedral of the diocese was designated to the Corpus Christi Church in 1951. The sanctuary and majority of the nave — the church’s main aisle — now function with the parish of Our Lady Star of the Sea, located by downtown’s North Beach.

The history of the Corpus Christi Cathedral begins in 1855. It is the second designated cathedral — Old St.Patrick’s being the first. After a large fire damaged the church in 1938, the John G. Kenedy family donated their residence as the new site for the church. Kenedy’s generous donation prompted many more to follow, which allowed for an elaborate church to be built in 1940. Pope Pius XII instructed Bishop Ledvina to christen the new church after the city in which it was founded. Three months after the church was established as Corpus Christi Church, it was designated the Corpus Christi Cathedral.

The Episcopal Church of the Good Shepherd

The years after this church's beginning in 1860 were definitely the most trying as the Civil War (1861-1865) was approaching. In fact, no documentation of meetings exist from 1862 to 1865. The church’s congregation worshiped without the leadership of a minister for more than 10 years. The current location of the Church of the Good Shepherd was established in 1926.

When First Baptist Church was founded in 1878, its first worship services were held in the revamped shop of a local blacksmith. In 1910, a small sanctuary was built and used until the church's final home facing Corpus Christi Bay was established in March 1950.

Even though this church is not as old as the others, its origin and beauty are nothing less than awe-inspiring. In 1998, Father James Kelleher, the founder of Our Lady of Corpus Christi, was determined to build a large and elaborate adoration chapel. An anonymous benefactor took interest in Father Kelleher’s vision and extended an invitation to join him in a visit to a world-class perpetual adoration church that was nearing its completion: Mother Angelica’s Church in Hanceville, Ala.

That evening, the anonymous donor divulged to Father Kelleher that God had blessed him with the money to pay for the chapel he had envisioned and that he would like to help make his vision a reality. The chapel is erected in the shape of a cross, with a 75-foot, blue-painted dome embellished with gilded stars to symbolize the Star of the New Evangelization — Our Lady of Guadalupe.